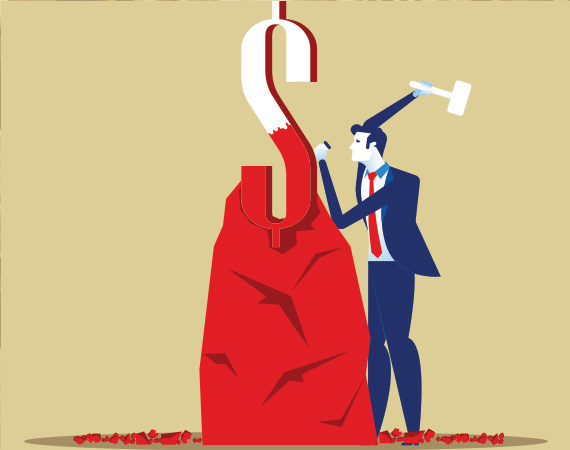 With just a half-day’s investment of time, CoreValue software gives manufacturers a quick sense of what their company is worth – and what it could be worth.

For manufacturers, knowing the value of their companies goes beyond preparing to put out a “For Sale” sign.

While many are looking to sell or transition leadership from one generation to the next, or one owner to the next, there are others, according to Steve Haarstad, looking beyond to assess the functionality of their operations through “value check.”

Haarstad, one of the business growth consultants at Enterprise Minnesota, oversees a program called Enterprise Value that uses CoreValue software to analyze a company from the perspective of 18 operational “value drivers.”

“They can use the software to help define the strategic direction the business needs to take over the next few years,” Haarstad says.

“They can put together a strategic game plan to increase their company’s value. Then they’ll see where they’re strong and where there are opportunities to improve.”

CoreValue was developed over the years by two MIT professors who initially created it for the financial sector. As it gained traction, they refined it for use in other sectors, such as manufacturing. Enterprise Minnesota’s consultants deliver CoreValue to clients through a licensing agreement. It is currently utilized by more than 50 percent of America’s Manufacturing Extension Partnership (MEP) Centers.

Taking less than a half-day time commitment to gather inputs about revenue, profitability, employee headcounts and a variety of other perspectives, the software uses algorithms to compare a company’s performance against a massive database of existing information about other companies. It then produces a company’s value, along with an extensive list of factors that could increase that value.

Haarstad has advised several clients who have also received a formal valuation from an accounting firm or a broker. “The output of this CoreValue system has often been within 5 percent of other valuations,” he says. “Its accuracy is pretty reliable.”

The standard price tag for the Enterprise Value project is $5,000.

Enterprise Value involves three steps, Haarstad says. The first is typically a 30-minute phone call to set expectations and who should be involved. The second is a three-hour session to gather inputs that will assess the operational performance of the business—such as revenue, profit, zip codes, etc. It consists of a series of best practice questions in which respondents self-assess against 18 value drivers (see sidebar). The final session reveals the results.

Haarstad is intrigued by the innovative questionnaires through which company executives provide information. Instead of asking respondents to compare the performance of their companies to best practices on, say, a one-to-five scale, the CoreValue program uses casual words and phrases one might use in conversation with a friend, neighbor, family member, or an acquaintance.
For example, an initial question on growth states: “We have grown faster than our competitors in the past up until now. And we have projections that suggest we will grow faster than the market in the future.” Manufacturers can then respond with: “Yes, our business is on fire,” or “We’re growing at a pretty good clip,” or “Our growth is steady, we’re doing okay.” The bottom of the scale is something like, “We’re really not growing right now.”

The program then assigns a potential financial value to each of the 18 drivers and shows where the company can optimize its value. “Companies recognize they’re not perfect in all 18 areas, so they have something to work toward,” Haarstad says. “The current potential enterprise valuation might be $12 million. But based on their answers, the current value is maybe $8 million. So, there’s a gap of $4 million to work on.”

Casey Mahon is the perfect example of a company chief executive who wants to use the CoreValue snapshot to guide strategic planning. Mahon is president and CEO of St. Cloud Window, a company that manufactures custom-made, commercial-grade aluminum windows and door products.

“No two people usually agree on value, let alone five. At the annual shareholder meeting, we talk about value, but no one is ever really sure what that value might be. I think from my perspective in my position, it’s important that we manage expectations.”

The company isn’t for sale, Mahon says, but it is markedly different from the one the sisters inherited in 1991. Today the company has a 32,000-foot facility and leases another 7,500-foot facility. It employs 48 full time employees and nine temps. And, he says, he could hire another 10 employees if he could find them.

“Times are very good. Our lead times are such as we’ve never known before. Historically, our lead times have run from eight weeks on the short side to 12 or possibly 14 weeks on the long side. Now we’re running steady 25 weeks.”

Even the nature of the business is rapidly evolving. “In the early 2000s, contracts that we thought were big contracts are not big contracts today,” Mahon says. “The sales volume that my father-in-law enjoyed was substantially less in volume, dollar value I guess, during his tenure, but the economics were different. It was a very successful, nice little company.”

The industry has also changed. All of the component expense categories have changed. “We’re all aluminum in our business. The cost of aluminum is substantially different today than it was 30 years ago. Glass is different. Everything is different. Labor is hugely different.”

“Everything goes up proportionally,” Mahon continues. “Those are the differences. It’s just the escalation of materials, labor, taxes, and regulatory influences. The cost of a window test today for us is 10 times what it was seven years ago. We used to be able to do it in an afternoon. Now it takes almost a month or more to complete.”

The primary driving force of using CoreValue was to determine the value of the company in a very active market. “Construction is crazy. There is a fair amount of M&A going on in our industry. There’s a prospect of what if, what if somebody actually made an offer, would we be prepared to determine if that was a good offer or not? It was one of those days of reckoning where we decided we should really find out our worth for ourselves, for our own satisfaction, because one shareholder might have just a pie in the sky expectation of the company’s worth. Another one might think, ‘Well, it’s really not worth much of anything considering how we do business,’ for whatever reason.”

Mahon says the valuation came in almost exactly where he thought it would. “I’m not a big finance guy, so it was fun to speculate and then be validated.” He was surprised, though, that the potential value of the company was higher than he expected.

“Knowing the valuation makes the decision-making process much more comfortable,” he says. “You don’t lay awake at night trying to weigh a decision on the scales of balance. You have a good sense of what the value is, and you have a good sense of what your management decisions are going to do to that value short-term. It makes it very comfortable for you to operate given where you are on your revenue stream and where you think you’re going on your future revenue. To me, it’s a good reality check.”

Steve Palmer, president and CEO at North Central Door, had a similar motivation for using Enterprise Value. The Bemidji-based company has been manufacturing residential and commercial garage doors for 50 years. He used the valuation exercise to give his four partners a snapshot of their company’s value and what they could do to maximize it, all while enjoying a record-setting sales year.

Although he engaged a local CPA firm to assess the company’s value, Palmer was attracted by how quickly and easily the CoreValue software could prescribe factors to increase the value of the company.

“A lot of it made pretty good business sense,” he says. And while he can’t benchmark against other companies, “it gives you a good way to benchmark where you are with your business and how you can improve things.”

Palmer says the software confirmed some of his own judgments about the company. It identified areas for improvement, he says, such as in marketing and sales.

He then reached out to Enterprise Minnesota to help map out a strategic plan that would maximize company value.

“It’s an action-oriented tool,” Palmer says. “It’s a great resource for a smaller business to set a baseline of where you’re at now, and what activities you can do to try and make your business more valuable.”

Todd Sparrow, president of Hawley-based Rapat Corporation whose 85 employees manufacture material hauling equipment for world-wide distribution, used the CoreValue software to provide an objective snapshot of where his company could improve.

“We’re not for sale,” he says. “We weren’t looking to get a value of the company to take to creditors or to banks or to potential buyers.” He says he was intrigued by how the software assesses a company on the 18 diverse value drivers.

“I liked that I had the ability to look at the organization, from top to bottom, and identify its strengths and weaknesses. In the end you almost get a SWOT analysis of the company. You see areas where you’re strong, but it also outlines areas where you may be vulnerable.”

And CoreValue identified areas he hadn’t thought much about, such as trademarks, intellectual property, and contracts. “We don’t have a lot of formal contracts from key suppliers to key individuals that work here,” Sparrow says. “Realizing those things was kind of eye opening.”

The software analysis also caused Sparrow to expand his view of succession planning beyond his top people. “It occurred to me that several of our main positions are kind of covered, but you get below that top line management, and we don’t really have the supervisory plans in place for succession planning.”

Sparrow limited his Enterprise Value team to himself, his controller, and his operations manager. “I think that worked out really well. To include the whole management team would have been overkill,” he says. “It would have taken too long. There would have been too much discussion on certain points, and we’d have probably gone off on tangents.”

“It was a nimble enough group,” he adds. “We got through the whole process in about four hours, which was nice. I didn’t want to dedicate two days to it.”

He said the smaller team also resisted the temptation to manipulate the inputs with rosy scenarios. While Rapat is currently experiencing robust sales, Sparrow’s team decided to plug in financial averages to provide a more realistic assessment. “I wanted to take a more conservative approach,” he says. “You can manipulate the inputs to make the output look however you want. If I were to put in numbers from this year, it would have looked substantially better.”

Sparrow’s advice to other executives who go through the Enterprise Value process is “to act on it. You can’t just put it in a drawer and say we’re a better company now. You’ve got to go out and use the information.”

Convert Your C.A.V.E. Men (and Women)

How a commitment to Continuous Improvement will bring surprising long-term…

How Mike Patterson built success at King Solutions on priorities…