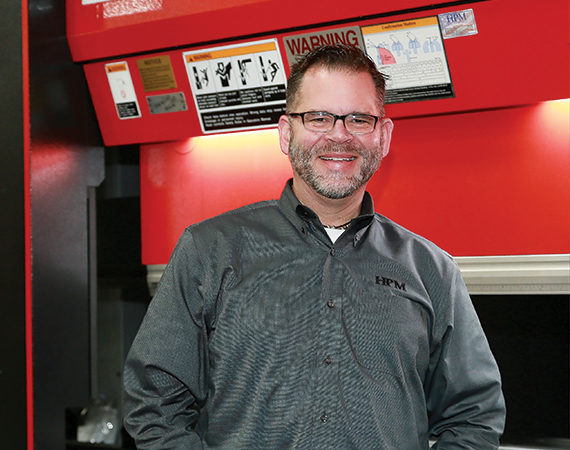 Herold Precision Metals thrived by embracing technological change while never forgetting that hard work and human ingenuity are its bread and butter.

Like any young boys, the Herold brothers Tim and Pat looked up to their dad. He owned a sheet metal business, and as soon as they were old enough to pull the starter cord, you could find them pushing a lawn mower around the grounds of Hansman Industries.

When they grew a little older, you could find them working in the company’s shipping department. And eventually, the brothers earned college degrees and put those degrees to work at their father’s company.

“The plan was to purchase the company from dad,” Tim Herold says. “But, he received an offer he couldn’t pass up.”

Before his sons could take over the company, the company was bought by someone else.

The brothers stayed on, though, and tried to make the best of it. They tried to hold firm to the ideals of customer service and quality workmanship instilled in them by their father. But there came a point, they say, when they knew a change was coming.

Customers they’d worked with for years wondered why the traditions and practices established by the senior Herold were, in their minds, falling by the wayside. And some suggested that the brothers should break off and start up their own business.

So, sitting around a card table in a garage, the brothers started working on doing just that. That meeting led to more meetings, which led to research, which led to strategic planning. And eventually, they found themselves sitting in a bank trying to convince a lender to take a chance on them.

During that bank presentation, though, a funny thing happened.

The banker stopped the conversation midway and said, “We’ve heard enough. How much do you need?”

Designs were drafted. Ground was broken. And not long after that garage card table meeting, a dream came true: Herold Precision Metals was born in 1997. Today, after a handful of expansions and after having weathered the recession of 2008-2009, HPM is a shining example of a sheet metal manufacturing company that nurtures employees, values innovation and keeps adapting to meet the needs of an ever-evolving customer base.

When the brothers went to that meeting at the bank, they did so with the kind of potential support most start-ups could only dream of. Because of the tradition of quality and customer service established by their father, two dozen companies submitted letters of support for the new venture.

When the company ramped up production in 1998, Herold Precision Metals was a beehive of activity. It had been renting space with another company but was getting very busy very quickly. When that other building tenant announced it was leaving, HPM took over the entire space.

But it didn’t take long for that space to be inadequate as well. So, the brothers opted to build a new facility.

HPM’s story, like the stories of most companies, isn’t without some drama.

HPM designs and manufactures precision metal parts and assemblies. It serves original equipment manufacturers, telecommunications companies, the gaming and entertainment industries, and more. If you’ve hit the gym recently, there’s a good chance the weight machine you did your sets and reps on has a “skin” that was designed and manufactured by HPM. (The “skin” is that protective casing that keeps your fingers from getting crushed by the machine’s moving parts.) The company has designed parts for self-service machines, including ATMs and lottery ticket and vending machines. It has also done design and manufacturing for security and surveillance equipment, heating ventilation and air conditioning, printing equipment and myriad other applications.

“Under the hood,” so to speak, the facility is outfitted with a litany of top-end sheet metal manufacturing equipment.

The equipment Herold Precision Metals has on its 110,000-square-foot site includes:

But the best piece of equipment has nothing to do with lasers or brake presses.

When you ask Tim Herold what the secret of HPM’s success is, it doesn’t take him long to get to his brother Pat.

“I am technically the VP of engineering, but I’m more of a project manager and troubleshooter,” Pat says. “I do everything here except wash windows and fill out purchase orders.”

Official titles do little to capture the essence of Pat Herold. To illustrate that, let’s peel away the veil of HPM and take a look at his hobby. Well, former hobby, really.

Pat used to be a drag racer. Like, an actual drag racer. In fact, he’s raced cars in Minnesota, Texas, Virginia, North Carolina, Nevada, Illinois and Indiana. He retired as a driver in 2008, then worked as a crew chief for a few more years.

Before he retired, though, he won a lot of races. He also had a lot of close calls.

In September of 2006, on a race day in Virginia, his car was one of the first of two cars to roar down the 1,000-foot track, and tragedy nearly struck. After reaching the finish line, he pulled the drag chute release cable, but the parachute lanyard hooked onto the wheelie bar and tipped the vehicle upside down. He was traveling 205 mph at the time. The vehicle skidded 800 feet on its roof.

He says he knew he’d be involved in a crash at some point.

But Pat also says the experience wasn’t as terrifying as you’d imagine. Not for him, at least. He says that, when he’s in that car, he’s prepared for all potential mishaps, including a parachute that hooks on a wheelie bar and flips the car. He’s safe. He plans for all contingencies. And he brings that kind of analytical mind to his manufacturing engineering career. That love of machines and tinkering was cultivated a long time ago.

“When I was a kid I played with Legos and erector sets,” he says, “and those things became real. I have a miniature version of HPM at home. I have a water jet for cutting steel. I have a press brake, a mill, a lathe. Basically, a total encompassing fab shop. I wanted to be an engineer when I was a kid. Once in a while I’d go with my dad to work and see the equipment run. And that fascinated me.”

He took a metals class in junior high school and fell in love with it. After high school he enrolled at the University of Wisconsin-Stout where he studied manufacturing engineering. After graduating with honors, he went to work for his dad. He helped usher Hansman Industries into the computer-aided drafting era, a move he says was risky at the time but paid off.

Tim Herold attended the University of St. Thomas, and eventually the brothers were both at Hansman Industries, happy to be working for their dad. And then that sale happened. And they weren’t happy anymore.

The company grew quickly, as evidenced by all that expansion. But HPM’s story, like the stories of most companies, isn’t without some drama.

When the housing- and banking-related recession hit in 2008, HPM wasn’t spared.
“The year 2009 is a year I’d rather not revisit,” Tim says. “You could see the wall clouds coming in 2008. There was a lot of trouble in the air. We stayed profitable all 12 months, but it wasn’t without pain.”

Tim says the recession prompted them to switch from having two shifts to one, and they learned the value of communication.

“No matter what is happening, you have to keep everyone informed.”

Recently he’s been revisiting notes he kept from those days. The recent COVID-19 crisis has prompted similar worries. So, if nothing else, the recession gave them a foundation of how to respond to a crisis.

So they revamped it. They changed the progression employees must follow for advancement, and they made the new plan available for all employees to see. They expanded training as well. And instead of waiting for an order that required a particular machine set suitable for training, they simply went ahead and set the machine up anyway and produced parts … for no one.

“The parts are an investment in the company,” Tim says. “They’re an educational tool.”
Employees have responded well.

“They absolutely love it,” Tim says. “Everything is outlined in the training manual. Retention at the skill levels is very good. Turnover is very low. That’s because of the culture we have in our facility.”

A little help from their friends

Hunsaker says some of the workers knew about lean, while “some of the people were clueless. But now they understand. They even put up an idea board after our training.”

HPM, Hunsaker says, was typical of most companies in that some people have heard of, and embraced, lean principles. Others need a little enticing.

In the welding area, for example, Hunsaker says they were able to help HPM get rid of anything in the work area that wasn’t directly related to the welder’s job.

“By the second day, one of the guys—the biggest naysayer—said, ‘You know what? I needed this. I’ve needed to do this for 20 years.’ They were happy having their work area organized, and not having to crawl over or under things to get to the things they need to do their job. One person said, ‘I haven’t seen that guy smile in years.’ The guys were energized.”

“I’m in another business group and it’s great. And I think Enterprise Minnesota is right there with them,” he says. “It’s very interesting to be able to collaborate with people in our peer group. They introduced us to the lean program. It’s been absolutely wonderful.”

One of the things HPM is proud of is the way its designers and engineers interact with customers.

Tim likes to repeat a mantra when talking about HPM and the way they treat customers and business: “Maximize form, fit and function and minimize cost.” It’s not just a catchy phrase. It’s the foundation of everything they do.

“I think our future is bright,” he says. “One of the things we did that makes it that way is that we made a commitment to go down the road of a strategic plan. We started another one this fall. We’re setting goals for the company, and goals for people within the company.”

Remember that story about the bank meeting? The one where the brothers came armed with two dozen letters of support from potential customers?

Here’s another angle to that story that illustrates the support HPM engenders.

One of those supporters initially pledged $750,000 worth of work for the company. When that company’s owner realized they hadn’t met their commitment, he called Pat and asked him to do some quick design work. He wanted to keep his promise and honor his commitment to HPM. And when Pat completed the work, that supporter wrote a check for the remaining $30,000.

Blue Rhino is a design fabricator that combines creativity with…

Once ‘a lumberyard only with metal,’ Bemidji Steel has added…