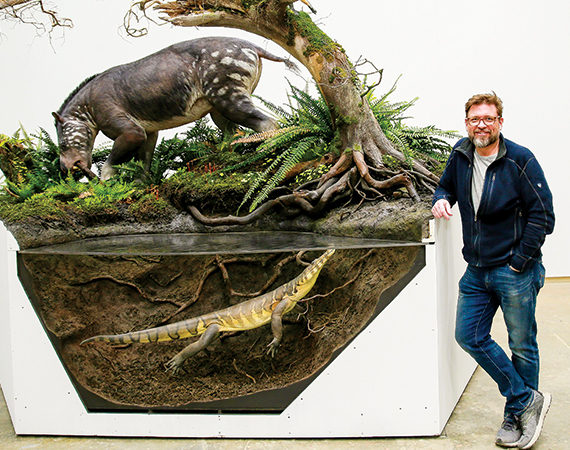 Blue Rhino is a design fabricator that combines creativity with innovation.

Blue Rhino Studio holds a unique niche in Minnesota manufacturing, and it all started in the garage of co-founder and sole owner Tim Quady.

The studio does interpretive design and artistic fabrication for museums, visitor centers, and zoological environments all over the world. Since its founding in 1999, the company has earned a reputation for artistic quality and value in the business of creating realistic, interactive exhibits that represent the natural and animal kingdoms.

Quady’s first project at Blue Rhino was to manufacture a replica of the Split Rock Lighthouse for a bar at the Minneapolis/St. Paul Airport. Quady built it in his garage.

Not long after, Quady and co-founder Dave Leak leased an inexpensive 6,200-square-foot space in Bloomington. From there, they worked on projects for mini-golf courses, water parks, restaurants, movie theaters, and the old Camp Snoopy amusement park in the Mall of America.

The company experienced early success, partly due to Quady’s work in the fabrication business since college. He worked for Newton, Iowa-based Deaton Museum Services during and for several years after earning his bachelor’s degree in fine arts from Gustavus Adolphus College.

“I loved everything about that job—I loved the company and the guy who owned it,” he says.

At the time, Deaton was owned by trade show company Display Masters, which was starting into the museum services business. They moved the company to New Hope, and Quady moved with them.

“I started at Deaton by unloading trucks and cleaning out the warehouse, just being a 19-year-old moron doing anything they asked,” he says.

Quady then began doing artwork and fabrication. But when Display Masters got purchased by Exhibitgroup/Giltspur, an international trade show company, the operation shifted to Chicago, and the organization lost the small-company intimacy that Quady had loved.

After painting fulltime for about a year, Quady began exploring starting his own company.

“I was 28, I was starting a family, and I realized the kind of work I did at Deaton was what I wanted to do for the rest of my life,” he says. “Just not necessarily for a gigantic international company.”

Alongside Quady was Jim Burt, a University of Wisconsin-River Falls art student who came on board as an assistant for Blue Rhino and remains the company’s lead sculptor to this day. He began at Blue Rhino by creating the company’s first big-time museum dioramas for the Science Museum of Minnesota, depicting the Wannagan Creek paleontological site.

Working from a 16,750-square-foot facility in Eagan, a full-time corps of elite artists and craftspeople manufacture two- and three-dimensional exhibits that include dioramas, sculpture, mural, carpentry, and metalwork.

“The quality of their work is second to none. The sculptures of the animals are the best there are.”

From a 10-foot grizzly to a woolly mammoth and an aviary environment, the small staff of sculptors and craftspeople, both on-site and freelance, can do it all. Blue Rhino rarely repeats work, and it will never create a knock-off of a previous project for less money. Their creations not only need to be authentic, but they also must be easily disassembled, packed up, and shipped.

Blue Rhino’s client list includes casinos, hospitals, and the Mall of America on up to the San Diego Zoo and the American Museum of Natural History in New York City. Blue Rhino employs no sales staff; all their work comes via word of mouth.

“You can tell that it’s a very entrepreneurial, very artistic company,” says Enterprise Minnesota President and CEO Bob Kill. “They’re focused on handmade, high-end products. When you compare a machine-made animal replica to a handmade one, Blue Rhino is much more on the artistic side of that business. Why is handmade jewelry expensive? Because it’s handmade.”

Quady has remained immersed in this business his entire adult life, giving him a keen understanding of the work and clientele, and who has the chops to do that work.

“When I started, I said, ‘I’ll do it myself. How hard can it be?’” he says. “When you start a company, the two things you need are an absolutely unfounded sense of optimism and a completely naïve mindset.”

“But through the companies I’d worked with and for,” he continues, “I had a good group of people to surround myself with.”

That prestigious list of clients comes with a lot of repeat business and a lot of accolades. The San Diego Natural History Museum was impressed when Blue Rhino created a full-size pterosaur, a baby mastodon, and an American lion.

“Their ability to capture the essence of our vision for the Eocene diorama’s prehistoric creatures, plants and atmosphere was uncanny,” says Jim Melli, the museum’s exhibits designer. “The quality of their work is second to none. The sculptures of animals are the best there are.”

A fearsome, eight-foot grizzly is typical of the studio’s attention to detail. The bear’s fur is brown and a bit matted; his yellowed teeth are in full snarl; his right paw is set to dispatch razor-sharp claws. There’s even a dribble of drool hanging from his mouth. One has to look twice before resisting the urge to flee.

That level of quality probably requires the latest CAD software, custom-made machinery and all manner of sophisticated equipment, right? Hardly.

“Let’s see,” Quady says, as he ponders his operation. “We have a scissor lift, a forklift, and a table saw. Everything else is hand tools. Ninety-five percent of what gets fabricated here is made from steel, plywood, foam, fiber, epoxy, and latex paint.

“Most of the work goes toward planning, designing and fabricating, and we have the people with the vision and skills to do that. The equipment is next to nothing. If this place blew away in a tornado, we could pretty much go to Home Depot the next day and get everything we need. It’s all the artistry of the people.”

The number of projects Blue Rhino takes on in a year depends on the scale and complexity of what it is handed. To underscore the exclusivity of the studio’s work, it used to take on about 30 projects a year; now it’s closer to six.

The projects are complicated and time-consuming and range in budget from about $10,000 to $2 million. The company is about the size Quady wants it to be, so growth beyond the Eagan studio is unlikely.

“We used to do mini-golf courses and water parks,” Quady says. “Now we can be a little choosier. What we do is artwork for education’s sake. That narrows it down to natural history museums, science museums, nature centers. The focus continues to tighten. That’s the passion that drives everybody here.”

Enterprise Minnesota’s Kill says Blue Rhino is a significant example of a manufacturing company whose focus is innovation and artistry.

“They’re manufacturing what I would call very high-end, high-quality objects for studios, museums, and nature centers all over the world,” he says.

While the Blue Rhino team is invaluable, the company depends on client sources to make sure that what they produce is as authentic as possible. The company works with paleontologists and museum experts who interpret specific anthropological elements for the company’s sculptors. That’s a huge factor in the company’s work. After all, if the environment of a diorama isn’t correct, the entire project could fail.

At a recent holiday party, Quady and Burt took a moment to gaze at Blue Rhino’s massive studio and think about how time had passed. As the boss, Quady doesn’t spend much time in the studio these days, so pausing to look around was a revelation.

“We were talking about what we’d done and what we have coming up,” Quady says. “I said to Jim, ‘Did you think we would ever grow up to do this? We thought we had peaked 10 years ago.’”

As for the future, Quady wouldn’t mind staying on the same path and keeping up the same rate of momentum. In fact, it would be fine with him if in 2030 Blue Rhino was doing the same type of work for the same kinds of clients. But at the same time, he continues, it wouldn’t be bad to be able to say, “Did you think we would be here back in 2020?”

“We’re always on the lookout for the next, different, challenging thing. The scope and scale change dramatically. But there’s still a lot of similarity—it all relies on specific, talented people.”