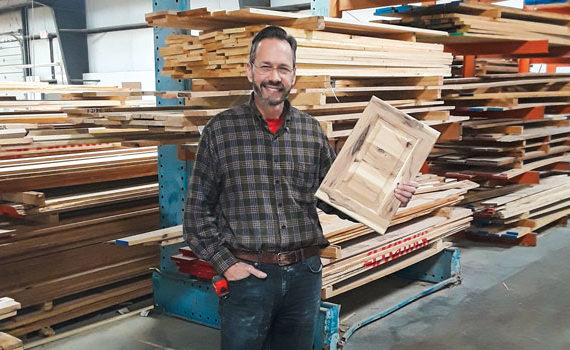 Bored in retirement, former telecom exec Rick Buyens bought a thriving company where he could apply his longtime interest in woodworking

On most weekdays, Rick Buyens’ alarm chirps him awake at 4:45 a.m., giving him enough time to shower, shave and drive the 35-minute commute north from his home in Maple Grove to Distinctive Door Designs (DDD). At 6 a.m., he and his 35 employees begin their 10-hour, four-day workweek.

“There are times I look in the mirror and ask, ‘Really? What am I doing?’” Before buying DDD six months ago, Buyens admits, there were probably only 10 times in his life he rolled out of bed that early in the morning.

Just a year ago, in January 2018, Buyens optimistically stepped into what he thought would be his care-free retirement years. He achieved a successful lifetime career as a corporate telecom executive, most recently with a seven-year stint as vice president of global accounts at CenturyLink, where he managed a billion-dollar portfolio. His financial advisor told him his retirement savings would guarantee “three hots and a cot” for the rest of his life. And when CenturyLink offered a retirement buyout, he leaped at it.

“January was a wonderful month,” he recalls. “I’d get up every day and decide what I felt like doing. I got in great shape; I was going to the gym five times a week. I was thinking, ‘This is great.’”

Then came February. “I started getting bored,” Buyens admits. And by March, with his wife Jenny still commuting to her job every day, “I got really bored.” He started looking around for a volunteer project or the opportunity to buy and run a little company.

While he was open to different options, Buyens knew they wouldn’t include a return to Corporate America. His suits and ties would stay in his closet, his days would not include a deluge of conference calls, and his workweek would not involve killing time waiting for airplane departures in the Delta Lounge at MSP (while at CenturyLink he traveled 45 weeks each year, attending to his 13-state region at CenturyLink).

Buyens’ business broker eventually introduced him to Distinctive Door Designs, a Princeton-based manufacturer of high-end custom cabinet doors and drawer boxes. Due diligence disclosed DDD was a flourishing, profitable company with a loyal customer base that valued its high-quality products and commitment to customer service.

A company of about $3 million in annual revenues, DDD’s price tag was just right for Buyens. “It wasn’t too big and it wasn’t too small,” he says. “I wanted to take on an acceptable level of risk.”

But the real bonus was that Buyens had been a passionate woodworking hobbyist since his father introduced him to it in their home workshop. Buyens says he fashioned a workshop in each of the seven homes he has owned, where, with the help of the internet, he crafts desks, end tables and bookshelves.

Buyens purchased the company and relocated from Edina to Maple Grove, where he and his wife would have equal commute times.

Buyens quickly acclimated to his new post-retirement lifestyle as an entrepreneur. After having been with DDD short of a year, Buyens already describes the company’s capabilities with the fervor of a camp meeting convert. Distinctive Door Designs, he says, stocks 32 different wood species and 25 different door styles. Beyond that, his staff of experienced cabinetmakers produces 15 different door edges, 15 panel profiles, and six inside profiles. “You end up with a countless number of doors,” he says.

He exudes pride at DDD’s commitment to a one-week turnaround. “If a cabinetmaker calls us and says, ‘I need 70 doors, 50 door fronts, and 25 drawer boxes for a big kitchen,’ our trucks will deliver them in five working days,” he says. “If you call us Wednesday, you’re going to get your doors and drawer boxes by next Wednesday.”

When occasional equipment glitches or an unusually large batch of orders requires it, Buyens and his team will add Friday to their four-day week.

While DDD is not bogged down by worker shortage fears, Buyens nonetheless envisions abundant opportunities for growth through technology. The company he bought was “old school” in many ways, beginning with the fact that the company was entirely operated—albeit successfully—with paper and pencil. “They didn’t know what Excel was,” he says. His five-year strategic plan includes sufficient budget to invest in capital improvements: $250,000 each for years two and four. “With half a million dollars over a five-year period of time, there’s an opportunity to reduce my labor costs, improve my safety, and improve my production.”

Armed with an MBA in finance, Buyens is comfortable overseeing DDD’s balance sheet and admits to keeping a careful eye on cash flow every day “because I need to make sure to make payroll, and understand my cost to goods sold, and all those different things,” he says. “It’s just a different lens.” He also observes that “it’s a whole different deal” making expenditures from his own pocket rather than a corporate budget line. “When I spend $1,000 of the business’ money, it’s $1,000 of my money,” he said. “That has a whole different meaning than if I’m spending $1,000 of AT&T’s money.”

His other managerial advantage, he says, is 30-plus years of corporate training, problem-solving skills, and the ability to take advantage of outside resources—a skillset likely lacking among his competitors.

He can also rely on an experienced workforce that seems receptive to change. “It can be difficult to change the culture across the entire business,” he admits. “Six of my employees have been here more than 15 years. So, they’re just used to doing things a certain way. We’ve changed a number of things, and they’ve been very receptive and willing to change—it isn’t like they’re giving me ‘Minnesota nice’ in the meeting, and then saying, ‘Screw that.’”

It helps that Buyens is patient. “I don’t have any direct sabotage. But the issue is, if you brush your teeth a certain way your whole life, and tomorrow morning you’re going to have to start doing it left-handed, you might go back the next day and pick up the toothbrush with your right hand, just because that’s what you’re used to.”

Scott and Cheryl Larson prepare a path that enables their…

Ashley Plouff uses the U of M’s Manufacturing Operations Management…