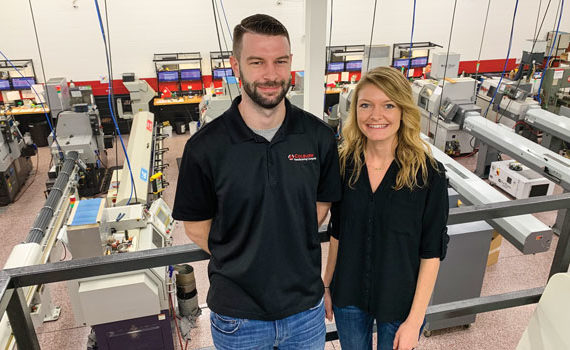 When Scott and Cheryl Larson rented a beachside home in Daytona Beach, Florida for their first-ever six-week winter trip this January, they intended to accomplish more than dipping their figurative toes into the Atlantic Ocean. As the husband and wife driving forces behind Fridley-based Colburn Manufacturing, they were also giving their two children, Clint and Liz, an opportunity to test-drive the company entirely on their own.

Cheryl, a CFO who is involved in “just about everything” outside the shop floor, including maintaining the company’s ISO certifications, predicts she and Scott are about four years from cutting the cord. Their transition out will help their kids learn to sustain the company’s high standards and remarkable revenue growth in the midst of a historic worker shortage.

And the offspring are eager to take over. Clint, who is in his 17th year with the company, started working alongside his dad “as a little kid” and all through high school, initially washing parts and cleaning floors and machines. “I never really thought too much about making a career out of it until after I finished high school.” He then learned machining at St. Cloud Technical College. “My dad always tried to teach me the machining end of it, but it never really clicked in my head until I went to school and learned the manual machines.”

Liz also grew up in the shop, helping out summers in high school and college doing deliveries or cleaning parts and packing and filing. “I always thought the shop was Clint’s thing because he was way more involved than me.” After graduating from St. Cloud State University with degrees in entrepreneurship and Spanish, she initially went into wedding and event planning, working for hotels. Tiring of weekend work, she finally accepted her dad’s continual invitation to work at Colburn. “We could really use you,” he said.

Colburn has scored average growth of 35 percent in each year since Scott founded the company in 1999. After an early career as a supervisor in a number of Minneapolis-area machine shops, he struck out on his own as a one-man shop located in a friend’s garage in Robbinsdale. Using just a manual lathe, a manual mill, and a Hardinge DSMA & CNC lathe, his early products were elevator parts and furniture pull knobs for drawers (both of which the company still manufactures).

In 2001 Scott moved the company to Osseo, expanding to a space of 720 square feet, where Scott acquired his first Citizen Swiss machine, and then to a larger space of 3,000 square feet. In 2004, Colburn expanded to their newly built custom pole barn in Big Lake, where he added four more Swiss machines. In addition, the company also added three different tool-sharpening machines. By 2014, Colburn purchased and relocated to its current plant in Fridley.

The growth, Scott admits, “has been crazy,” and he expects it to continue. Today the company employs 14 people, including family members.

The company has been able to sustain the rapid growth by paying close attention to employee relations. “We really make it a priority to take care of our people, our employees,” Scott says. And by doing that, he’s minimized employee turnover and maintained a steady workflow going through the shop.

In addition to offering generous benefits packages, the Larsons—all four of them—take a personal interest in the individual growth of each employee. The company makes good coverage for employee-related medical and dental expenses a priority with significant contributions on behalf of each employee and offers a 401K match and profit-sharing that Scott says is “at the top of the charts.” Additionally, a full cafeteria plan of supplemental insurances and coverages is offered to employees, subsidized by Colburn. On top of that, each employee chooses individualized quarterly growth goals that are reflected in regular performance reviews.

“We’re always looking for new employees,” Cheryl says. “So, if we met the right employee, even if we didn’t have a need at the time, we’d probably create the spot for the employee. We work really hard to maintain our employee culture. We have amazing employees who really do consistently go above and beyond. And so keeping them, keeping that culture, is critical.”

Cheryl admits that not everyone works out. “We once made the mistake of bringing somebody in who attempted to divide the team,” she says. “We won’t make that mistake again.”

Adds Scott: “I thought I had a couple of people hired from other shops; they made a commitment to come work for us. And then their previous employer gives them a big bump in pay, and then all of a sudden, they’re okay to stay there. So, it’s hard.”

The younger Larsons add that their age probably makes them better prepared to deal with younger employees.

“Having looked for jobs myself,” Liz says, “I know where people are looking and what things they’re looking for. Whenever we hire, we’re always looking for a good culture fit along with the skills. The culture fit is equally as important as the [work] experience to us because we are a small company, family-owned, and we want them to feel a part of it, not any different than us.” As for training and qualifications, Liz adds that the company has recently hired a couple of new employees with less experience, “with hopes of really growing them here.”

Clint, as a millennial himself, is optimistic about hiring millennial employees.

“A big thing for millennials is how you present your company,” he says. “Showing them the technology that’s going into manufacturing and having a clean environment and making continuous improvement is a lot of what millennials want. Not all millennials are bad. Being one myself, I work a lot, and I’ve met a whole bunch that are really hard workers and don’t fit the typical millennial stereotype. But that goes into our hiring process, asking the right questions to figure out if they are one of the millennials that you don’t want or if they’re going to come here and make a good name for themselves.”

Redwood Falls, Brainerd show how school districts and manufacturers are…