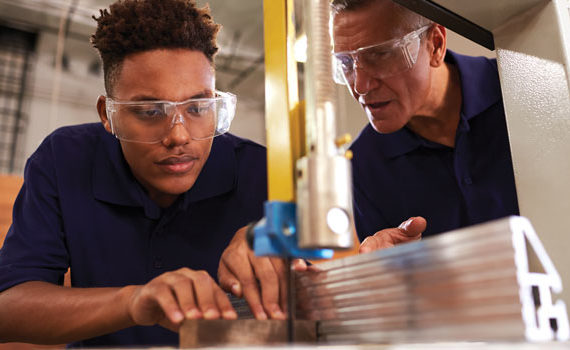 Redwood Falls, Brainerd show how school districts and manufacturers are working together

Redwood Falls became the next school district in Minnesota to incorporate a state-of-the-art tech facility in its schools by officially opening a $4 million 10,500-square-foot addition to its existing high school. Part of the remodel is devoted to agriculture, healthcare, business, and manufacturing/construction trades, according to School Superintendent Rick Ellingworth.

The Redwood Falls project joins the likes of Brainerd, Fergus Falls, White Bear Lake, Willmar, Hutchinson and others in the way it has achieved success by soliciting collaboration from its local business communities—particularly its manufacturers.

The building extension is called the Orrin S. Estebo Career Development and Technical Training Center, named in honor of a local attorney/philanthropist who personally contributed $1 million toward the project. The district’s plans for the facility include:

Ellingworth says the project is the culmination of “tremendous community involvement.” School officials solicited input from 35 local business leaders and traveled to Alexandria, Willmar, and Hutchinson schools to view their already-created tech facilities.

“Instead of asking for dollars, we are asking for ways they feel they’d be able to help us,” he says. “Whether that’s lending us people or money or equipment is up to them.”

“We have engaged all types of different folks and are hoping they come and use the site. When they do enter the training center, their eyes just light up because they start thinking about possibilities.”

Ellingworth says school officials envision utilizing it like the school’s community center, “a 24/7 operation, where there is a lot of trust, and where people could come in to use it for all kinds of things.”

A separate entrance fronts the new career and technical guidance center. “It looks like you’re walking into the manufacturing campus,” Ellingworth says, adding that he also moved the school’s counseling staff to the facility. “It does not look like a school. It’s all open. Everything is glass, so anyone in the hallways can look in and see what’s going on. We thought our kids might be distracted by this, but the kids are so interested in what they’re doing, they don’t notice.”

The district is also in preliminary conversations with Minnesota West Community and Technical College about using the facility for educational collaboratives for kids and adults during the school day, in the evenings, on the weekends, and even over the summer.

To get psychologically ready for the facility, Ellingworth closed school for the afternoon on November 21 and transported his entire staff across the street for a half-day visit at Daktronics, a large company that designs, manufactures, sells, and services video displays, scoreboards, digital billboards, dynamic message signs, sound systems, and related products. As part of that tour, plant manager Tom Quackenbush outlined concerns that manufacturers have statewide regarding worker shortages.

Brainerd recently announced that it, too, would rely on public/private collaboration to expand its already-robust technical education course spaces.

Brainerd School Superintendent Laine Larson said the district continues to solicit wide input from task forces—that include community participants—to assess the value of its career and technical education programming and “what spaces are needed to enhance the partnerships with our business community and our college.”

Some of those conversations, she says, involve soft skills as well as hard skills.

To get a sense of the tight camaraderie among manufacturers and the business community in Minnesota’s Brainerd Lakes region, you don’t have to go much further than “Career Exploration Day” held every spring at Central Lakes College.

The annual career expo attracts more than 2,500 students who bus in from 29 high schools in a 45-mile radius of Brainerd to spend a full day of hands-on exposure to the kind of employment options they might have after graduation.

The event—and its sponsor, the Bridges Career Academies and Workplace Connection—put Brainerd in the elite forefront of cities nationwide that have launched homegrown initiatives to combat the expected shortage of employees.

Twyla Flaws, a founder of Bridges and personnel manager at Clow Stamping, the area’s largest manufacturer, has called Bridges “a partnership between the schools and the businesses as a way to get kids to come out and see, tour, and know what we do in business. If you want to hire kids from your community, they need to know you exist and they need to come out and see you. That’s the best way to home-grow your workforce.”

Superintendent Larson attributes Brainerd’s success to the fact that “we don’t just talk the talk, we walk the walk.”

“We’re all committed to providing jobs that will sustain great careers for these kids in the future and help these kids develop what their purpose is. We want to make sure they are aware of possibilities right here in our region where they may want to stay and contribute to the community.

Scott and Cheryl Larson prepare a path that enables their…