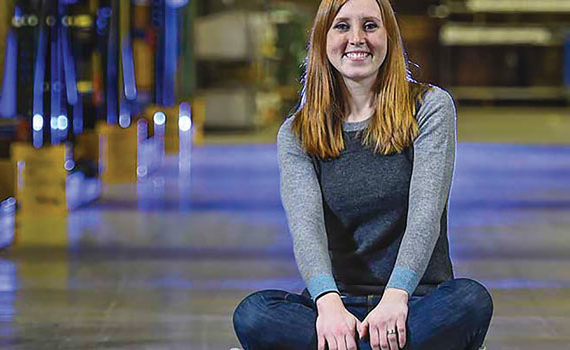 One reason Ashley Plouff excels in manufacturing operations is that her mind craves order. She’s a natural-born problem-solver who won’t stop smoothing over a snag until she’s thought of a solution.

But Plouff didn’t always see her calling in manufacturing operations. She had a narrow understanding of what manufacturing translated to in real life until she started packing boxes at Northern Brewer, a homebrew kit supplier. Eventually, Plouff moved her way up into operations, working behind the scenes in an enormous distribution warehouse. She then realized she not only had a knack for operations management but also really liked it.

Searching for the Right Job
The job at Northern Brewer began as a tide-me-over gig. Plouff had just relocated to the Twin Cities from Milwaukee, where she completed one year of college before dropping out to work full time and figure out what kind of degree was right for her. While she wanted to complete her bachelor’s degree in the future, she didn’t want to spend her hard-earned money until she knew what she wanted to study.

“I got an interview at Northern Brewer to work as a box packer. I liked that it was a small company at the time, which meant there might be an opportunity for growth if I kicked butt at packing boxes,” Plouff says.

In short order, Plouff became a fulfillment supervisor, coordinating workflow and ensuring that all orders went out on the same day they were received. From there, she advanced to a production supervisor. She spent her days patrolling a warehouse, making sure homebrew kits were assembled, packaged, and shipped out with efficiency. From Plouff’s perspective, though, the efficiency piece left something to be desired.

“I used to refer to it as a kid warehouse because that’s what it felt like—a bunch of 18-year-olds running around, scrambling to get stuff out the door,” Plouff says. “Everybody that was working there at the time was very inexperienced, but that’s also what made it fun, that lack of corporate structure.”

Even so, the company was growing; orders for homebrew kits continued pouring in. With employees scrambling around the warehouse in search of this package of hops or that bag of barley, Plouff began conceiving ways to remedy the disorder. Without really realizing she was stepping into manufacturing operations territory, she slowly added structure and standards to the warehouse.

“The structure was very loose at the time. A couple of items over here, some over there, and they all needed to be packaged together,” Plouff says. “Packers were forced to take this weird path through the warehouse to get the materials they needed. That’s where I started restructuring the space, looking for those inefficiencies, and making cellular designs so workers could remain stationary and work faster.”

In the process of doing this restructuring, Plouff realized she’d found the work she loved. “Something finally clicked,” she says.

Finding Strides
Something clicked for Northern Brewer, too. The company had tapped into a demand the beer-loving public had: to brew ales, porters, and lagers in their basements. Northern Brewer expanded its production by acquiring another local homebrew kit supplier, moved into a much larger warehouse, and hired a consultant to help oversee and advise during the merger process.

The consultant offered tools and resources to incorporate “lean manufacturing” principles into the operation. Plouff was fascinated. She asked questions, which led her to realize she wanted to learn more about manufacturing principles and operations practices.

“That’s when I started looking at degree programs, too. I found a lean-sustainability class through the College of Continuing and Professional Studies at the University of Minnesota. It was part of the Manufacturing Operations Management (MM) program, and when I reviewed the MM curriculum, I found other courses that piqued my interest.”

Plouff had found the subject matter she wanted to invest in; so, she filled out an application right then and there. “I cannonballed into it.” After getting accepted into the program, Plouff began earning her bachelor’s degree through evening and online courses, continuing to work during the day. Her classes taught lean manufacturing, project management, and outsourcing that she could apply directly to her job at Northern Brewer.

Northern Brewer’s Big Break
Because Northern Brewer was running such a successful operation, thanks to skilled supervisors like Plouff, it caught the attention of beverage behemoth company Anheuser-Busch InBev (AB InBev). In August 2016, AB InBev bought out Northern Brewer and promoted Plouff to operations manager after the acquisition shook out.

“I’d seen a lot of iterations of that warehouse, so being able to get production to a level where we were efficient enough for a company like AB InBev to take an interest in us was the ultimate reward for me,” Plouff says.

Getting Results that Resonate
Plouff’s promotion was due to a lot of hard work in organizing the Northern Brewer operations to run like a well-oiled machine. In addition to establishing cellular designs, or stations, where workers could get the most done, Plouff cut out the need for a quality control position while decreasing the margin for error in homebrew kit packing.

She did this through designing “scrolls.” Each homebrew kit has a multiple-feet-long laminated scroll of printed paper with images of the items the kit requires as well as the quantity. Box packers working on a particular kit find its appropriate scroll, unroll it on a long table, and gather product (all located directly behind the workers) to build each kit accurately, one by one.

“There’s more pressure for the builder to get the right things on the table, which means they take more pride in their work and there’s less possibility for error,” Plouff says. “That was a huge cost savings for Northern Brewer. We saw claims for mispackaged kits go down by 90 percent. It’s all about eliminating the waste and standardizing the process in each department.”

What’s Next
Plouff acquired nearly seven years of hard work at Northern Brewer under her belt as she pursued her degree. “There have been so many things in the program that I’ve applied directly to my job,” she says.

As she looks to the future, Plouff feels confident her hard-won skillset in operations management will serve her well. “I like having a goal and achieving it, finding the straightest path there.”