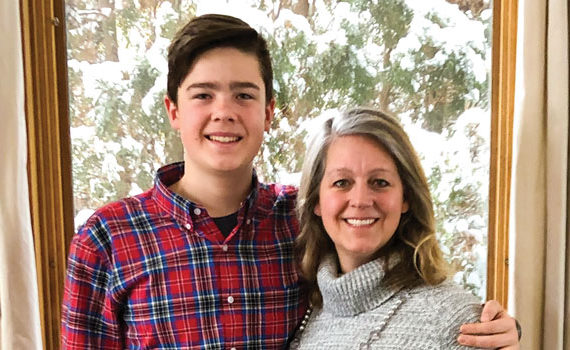 Carrie Koelzer, a home school mother from Stillwater, recently called Enterprise Minnesota’s office to tell us how much her 14-year-old son Charlie enjoyed reading Enterprise Minnesota® magazine and was interested in a complimentary subscription, if available. Happy to oblige(!), we were intrigued that a middle-school student regularly read a publication that celebrates and explains manufacturing in Minnesota.

Carrie’s interest in Enterprise Minnesota evolved from a project she developed as part of her home-teaching curriculum. The project requires her son to read from magazines about different industries—and potential career opportunities—and then summarize them in verbal presentations to the family that they call “Charlie Talks.”

Carrie and her husband, Chris, are both college-educated professionals who believe there are numerous pathways to a successful future career outside the traditional four-year college degree route. Carrie attended college in Iowa. Chris attended the Air Force Academy and then cross-commissioned into the Marine Corps. When Chris retired from the military, he launched a couple of aeronautical consulting companies as the family settled in Stillwater.

Tell us about the evolution of “Charlie Talks.”
I attended a home school conference to help me plan out seventh grade for Charlie. But because I also wanted to think beyond the one year, I went to a particular talk on ways to open your kids’ eyes—mine as well—to opportunities that we can consider doing for a career. The speaker said, “Have him read an article and share it with you.” So I thought, “Well, let’s take the Ted Talk idea and let’s make it Charlie Talk” (for our family).

I want my kids to practice public speaking, even if it’s just in front of us. It’s a good way to organize your thoughts. So, we came up with this very basic format for reading and presenting on articles: Give us a summary of the article and tell us how it impacts the world around you. And what’s your opinion on it? I think it’s important to not just read something and tell somebody what they want to hear, but share your opinion and have a dialogue about it.

Did Charlie like anything in particular in Enterprise Minnesota magazine?
There was an article or two about several guys in Hopkins who founded a company called NoSweat. It sparked a great discussion because it showed Charlie what grit really is and the sacrifices that are required to do something you believe in. I thought that was wonderful. Then, there was another article more recently about these kids from Gustavus who developed a security door. I dare to say it’s inspiring for him to see what’s happening out there at different ages.

Has this experience changed your perspective of four-year degrees?
My husband Chris and I aren’t suggesting that our kids shouldn’t get a four-year degree, but we do want them to know it’s not the only path. Chris went to the Air Force Academy; he had no college debt. But I brought a lot of debt into the marriage. I took jobs that I didn’t necessarily care for because my bills were due. The cost of education is ridiculous. I think it really puts a burden on young families starting out and having kids. I think the adverse effects of that burdensome debt are far more reaching than we as a society have really considered. I also think it prevents and limits innovation and creativity. Are there careers that require a four-year degree? Absolutely. But there are also a lot of careers that don’t. An organization called Praxis really got our wheels turning about the value of apprenticeships. Something like 98 percent of Praxis students get a job offer from their company after the program is completed, but during the training they’re still getting paid. However the math works out, you’re coming out ahead.

Is it too early to practically apply any of this learning?
My kids are pretty entrepreneurial. They are going into their fifth year with a business they started called Pets and Plants. Charlie helped start it in the third grade after neighbors would ask us for help. “Hey, we’re going to be out of town, can you help with this?” Another neighbor asked if we could come take care of their dog during the day for a few weeks. We said, “No problem.” We started talking about it, and my kids turned it into a business. They made business cards and door hangers and started mowing lawns, too. They could grow it more, but we’re keeping it small. We are talking about maybe buying a second lawn mower, though.

We were able to start that business in part because we homeschool, and we were able to offer a schedule that most other kids couldn’t. If someone needed a little help during the day, we could rearrange our classes.

It helped teach the kids the value of hard work and good communication skills. They are communicating with adults through email and texting. They’re learning how to invoice and learning to work together in a partnership. They’re being responsive and thanking people for the work. It all ties together.

Ashley Plouff uses the U of M’s Manufacturing Operations Management…