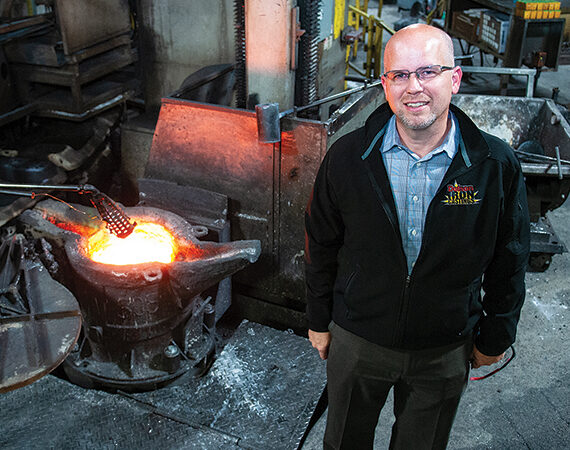 In 2008, Tyson Twait took a job as an accountant for an Owatonna company called Central Valley Co-op. Six months into the job, he had the grim task of breaking bad news to one of their best customers: He’d gone over their numbers with a fine-toothed comb and even checked every number twice, three and four times. Their financial records just weren’t adding up.

To help guide the company back to a place where it could pay its bills, Twait came on as a temporary bookkeeper. But during the second month he was there, Twait spotted an accounting error that revealed a stark and painful reality for the company. They were bankrupt.

“That’s hard news to break to a company owner. But I think he knew it. Piecing it all together, there was kind of a sickening feeling on both sides,” Twait says. “I had to foreclose on our largest customer, giving me a very quick MBA in the real world.”

Fast forward a few years and Twait, after a successful accounting career at various southern Minnesota companies, is the new CEO and president of Dotson Iron Castings in Mankato. He takes over for outgoing 45-year company veteran CEO Jean Bye, who had taken over for Denny Dotson, a titan of the small foundry world whose family has been involved in the company’s ownership since the 1940s. (Both Bye and Dotson remain close by, with Bye taking over as executive chair of the company’s board of directors, and Dotson never more than a phone call away.)

Twait takes over during an interesting period for any business. With the COVID-19 pandemic producing a volatile business climate, change seems in the air for every industry. But Twait is no stranger to change.

He was born and raised in Emmetsburg, Iowa, a town of roughly 2,500 people.

“We have both stop lights in the county,” he says with a note of ironic pride.

But athletic training wasn’t for him, and he transferred down the river to Minnesota State University, Mankato where he studied mass communications and marketing. He’d planned on going to law school, but those plans … changed. After working for a brief stint with his father in the financial world, he decided to enroll at Gustavus again — where his wife was now a faculty member — and get an accounting degree.

“I knew I needed to do something to get back into the workforce,” Twait says. “People said, ‘Go get an MBA.’ But I thought I should do accounting because that’s something tangible, and Gustavus paid for it.”

If you’re thinking accounting is a far cry from athletic training and mass communications, you’re not wrong. But Twait is the kind of person who is curious about everything. He’s also the kind of person who happened to be good at most school-related things. Writing and words came easily, he says. So did numbers and math.

But even though he likes numbers and math, he couldn’t see a future hunkered down over balance sheets tallying debits and credits. So, instead of becoming a Certified Public Accountant, he chose the Certified Managerial Accountant track, which keeps his work with numbers focused more on the big picture — how the numbers contribute to the overall success and health of a particular business.

He then started working for Ridley, Inc. in Mankato. A few years later, he took that job in Owatonna where he had to share the bankruptcy news to the company’s biggest client. He learned a lot from that experience, though.

“You go through school, and you’re moving numbers around, and moving debits and credits and what not,” he says, “and then you get into something like that and everything is moving so quickly that you’re having to react and really rely on common sense and logic — but you’re still using that financial background and how it relates to individuals and people. It taught me that sometimes when you’re moving numbers around on a piece of paper, people can get a little lost.”

Prior to his transition to Dotson, Twait had returned to Ridley and was promoted to Chief Financial Officer. A few years later, when Ridley’s parent company, Alltech, made some organization changes, Twait left. Then, in the summer of 2018, a few members of Dotson’s leadership team reached out to Twait to see if he’d be interested in becoming their new finance manager. After reading news accounts of how well Dotson treats its employees and how well regarded the company is in the community, he agreed.

A few years later, he made another move — an internal, upward move.

Because CEO Jean Bye was preparing her exit from the day-to-day operations, Denny Dotson thought Twait, despite having relatively little experience in foundries or castings, might be the right man to lead the company into an uncertain future.

“As I’ve watched Tyson interacting with employees, I notice he has the ability to ask incredibly good questions, and that’s the job of the CEO,” Dotson says. “We have highly talented technical people, many of whom have been with us for years.”

From a business standpoint, Twait says he felt comfortable quickly. And while he’s still learning the industry, he’s confident that the people with decades of experience who understand every nuance of the industry won’t let him fail.

“It’s not like anyone’s looking to me to solve anything,” he jokes.

Twait says he’s been inspired to learn more about Dotson’s standing in the foundry world.

“When you start visiting other foundries, other competitors, it really comes through that, wow, I guess we really do have a pretty good shop and really high-end things here.”