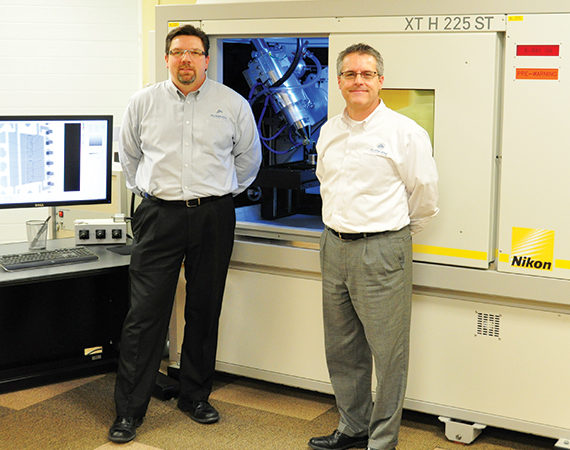 When they started Avonix Imaging in 2012, Brian Ruether and Jeff Diehm knew they were heading into uncharted waters.

“When you go to the hospital to get a chest X-ray or CT scan, we do the same thing but on parts and pieces,” says Ruether, managing director of the Maple Grove-based company.

Diehm and Ruether hit the ground running with their new business thanks to the reputation they built as standard bearers in the area of inspection services and system design and manufacturing.

They both originally worked for North Star Imaging in Rogers, an X-ray equipment supplier. They left, Ruether says, when the company was bought by a large conglomerate. “We pulled up stakes and moved on. It was a growing opportunity.”

In the case of 2D X-ray product inspections, images of a part are captured live on a monitor and can be shown in a video or in a still photo. The X-rays pass through the part and subsequently are converted into an electronic signal with the use a digital detector.

But because 2D imaging misses out on depth and details, Avonix also offers 3D imaging. The capturing of that image takes place on a rotational stage, where it’s rotated 360 degrees while images are taken at specific intervals. That group of images is then rebuilt to render the 3D X-ray model of the part, which offers far more examining options.

Avonix serves an array of industries, including aerospace, automotive, electronics, food, medical devices, pharmaceutical, and plastics. The company likes to keep its process simple: once the scope and cost of a scanning project is agreed on, the client company ships the part to be scanned to Avonix, who then turns around its imaging projects in as little as a day.

If that sounds like an efficient process, it is. But Diehm and Ruether knew there was room for improvement, so Enterprise Minnesota was recruited to provide guidance on the company’s quality management system.

They contacted us because they were looking at having a quality management system that was specifically designed for their business,” says Joel Scalzo, an Enterprise Minnesota business development consultant. “They interviewed three companies, and we were chosen as their partner.”

Working with Avonix, Scalzo took the approach that Enterprise Minnesota traditionally takes with its clients: defining a company’s leadership team in a way that will help create a business management system that works for the company.

Scalzo worked to make sure Enterprise Minnesota matched its resources with Avonix’s to ensure a successful project. He helped Avonix’s staff understand their best opportunities and greatest challenges.

Meanwhile, Keith Gadacz, a business growth consultant based in Brainerd, concentrated on the nuts and bolts of the project, such as helping Avonix earn ISO registration.

ISO 9001:2015 implementation, according to Gadacz, revolves around the creation of a business management system—including how a company operates its company, from its top-level strategic plans through its cascading objectives into individual contributor participation, as well as mapping key processes for effectiveness to deliver the output the company expects.

“I’m with them for 20 sessions over 10 months, about twice a month,” Gadacz says. “The first half is building the system the way they want it to function for their business. The second half is watching the system run. The final step is getting it registered to the ISO 9001:2015 standard.”

Why go to all that bother? According to a Harvard Business Review article from 2012, Gadacz continues, most companies experience 10 percent higher revenues and profits and typically higher employee satisfaction with ISO registration. It also lets them do business with companies that expect them to be registered.

“Other companies use that registration to monitor suppliers without having to do hands-on auditing,” he says.

Scalzo says that ISO registration can be something that companies feel they have to do but don’t necessarily want to do. Luckily, Avonix was 100 percent on board.

“When people embrace a business management program, they recognize how it’s going to help separate them from their competition,” Scalzo says. “Avonix has realized it has an aggressive growth plan. The company has a much better chance of achieving that now that it has better processes in place.”

Over the years, Avonix has transitioned from industrial X-ray imaging services to designing and producing the equipment used to provide those services. ISO registration will help the company continue to grow and innovate.

“Ultimately, achieving the registration will help us run a better business,” Ruether says. “Having the company under a standard helps make it easier for us to translate our business management systems to our customers when they ask what processes we follow.”

New Brighton-based entrepreneur Ryan Angelo sets his sights on the…

States Manufacturing harnesses the power of ISO to evolve into…