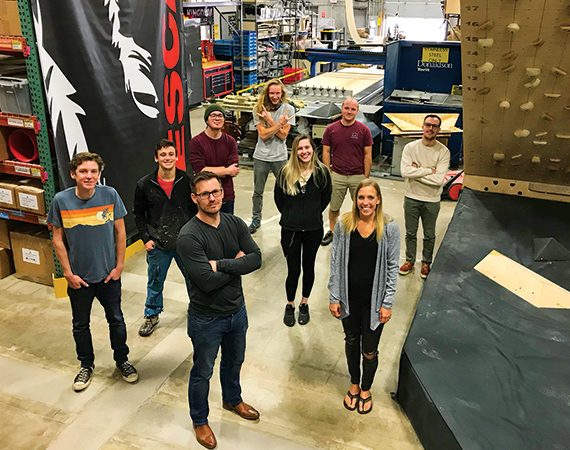 The sport of indoor wall climbing, already a $50 million business worldwide, is poised to grow even faster as it gets incorporated into the 2020 summer Olympics in Japan. And New Brighton-based Escape Climbing is ready to capture a larger share of that business.

Company Founder Ryan Angelo estimates that his company derives a third of its revenue from the holds, a third from associated hardware, and another third from training tools.

Angelo became a climbing enthusiast when he built a 16-by-30-foot climbing wall in a backyard storage barn as a high school student in Rib Lake, Wisconsin—a town of about 900 people located approximately 170 miles east of the Twin Cities.

Angelo honed his interest in the sport while working at commercial gyms in the Twin Cities as a student at the University of Northwestern-St. Paul. Realizing first-hand that climbing holds could be prohibitively expensive for people who wanted to build their own walls, he designed and constructed holds in his dorm room, which he then sold on eBay. From there, he began making his products in a garage and eventually turned it into a business.

“All along the way, I received validation from my customers that I was making a good product,” he says. In 2012, Angelo quit his job at a local climbing gym and became a full-time manufacturer. After two years of sporadic growth, the company got a foothold in the lucrative Asian market and evolved into the commercial gym market. Angelo currently employs 15 people with revenues around $3 million annually.

Today, he says, Europe constitutes about half of the world market for climbing holds.

“We’re a very niche market. But us only doing a handful of a million dollars a year is just scratching the surface of a $50 million market,” Angelo says.

A market differentiator for Escape Climbing, Angelo says, is “cadence, how fast you’re releasing new products and then the quality of those new products. That’s what gets me to come to work in the morning—the new, interesting product lines that we’re launching.”

Given the explosive growth in the market, only time will tell if larger companies like Dick’s Sporting Goods start to acquire and claim the marketplace, Angelo says.

In the meantime, he continues, “I come to work thrilled because I like growing a business. Just as I was early on, I’m really interested in designing a high-end product that makes a difference. And then, as you grow, you have more capabilities to serve your customers.”

Escape Climbing is growing its market share by creating multiple brands designed to appeal to niche markets. “Escape is more like the one-stop shop,” Angelo says. The future will include wall building, consulting, and flooring systems.

“There are a lot of opportunities to branch out and grow.”