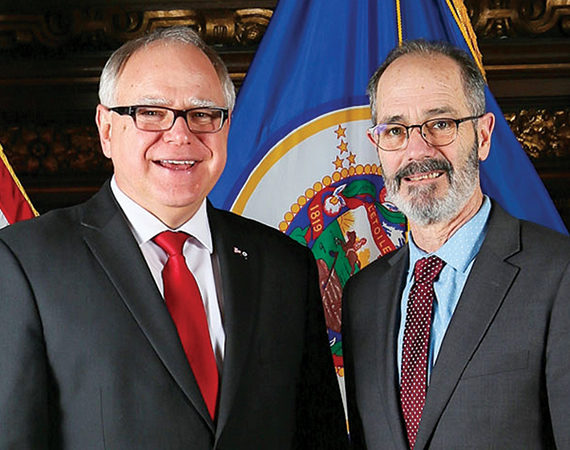 Representative Tim Mahoney: You’ve talked a lot about economic inequities in Minnesota. Would you describe that objective in terms of its special relevance to Minnesota’s manufacturers?
Governor Tim Walz: I have talked a lot about One Minnesota. I think the strength of Minnesota is the depth and diversity of our economy. Good middle-class jobs that don’t come with a lot of student loan debt, but come with the nobleness of the skills that are provided, are the manufacturing jobs in many cases. In southern Minnesota, as a member of Congress, I often talked about these initiatives that tried to create energy around manufacturing.

In the Mankato area, the focus is around agriculture. In Winona, it’s around composite industries. There is a sense that a lot of folks in rural America, or Greater Minnesota, felt like they got left behind, especially after the Great Recession. The jobs came back to the urban areas; Minneapolis-St. Paul is booming. What I think kept us going, which we want to keep pushing, are the manufacturing jobs that came back.

In the political world, people try to pit one area against another: “I’ve got mine and the reason you don’t have yours is because they have it.” In Minnesota, the depth of the economy and the manufacturing base stopped some of that from happening. We just need to make sure we don’t lose that; we provide the workforce and some other things, and we make it happen.

Some people have described manufacturing jobs as job-creating engines. I think you believe that.
I absolutely do believe it. I think all of us know that these jobs pay way above average, and they become skills you end up keeping for a long time. Those peripheral jobs in smaller communities really matter. These are the folks who can then afford to go and buy their furniture or their truck in town. They can have a little extra money to go out to eat.

I was touring the Fairmont area a year ago, this last summer. I went through five different manufacturing facilities. They went from the kind that get grease underneath your fingernails to ones where you could wear a white shirt. Bob Kill (president and CEO of Enterprise Minnesota) often mentions that the road to continued economic prosperity for manufacturers and their employees will evolve from public-private partnerships, especially in Greater Minnesota. He says these coalitions should include business groups, policymakers, nonprofits, educators, vendors, and community leaders. What are your thoughts on this? What role, if any, does administration play?
Bob is right; I’ve seen this. As a member of Congress representing southern Minnesota, I saw how these collaborations worked. I think it’s unique to Minnesota. And it gives us a real advantage.

Transportation fits into this. We can’t have an antiquated transportation system. There’s a reason that Walmart, UPS, and FedEx all encourage massive investments in transportation and are even encouraging things like user fees or a gas tax.

A $0.20 gas tax?
They do. They know if your gas is cheaper, and you’re sitting in traffic burning it, that’s useless. I think they see all these things fitting together, and the State’s role, in many cases, is being the partner that provides the infrastructure, whether that is transportation infrastructure or the workforce that’s there. I think that’s what they are asking for. Minnesota State University–Mankato plays a role. South Central College and its mechatronics program can play a role. Our trade unions can also play a role. All of these paths lead to job training, and one of the things we are seeing is the need and the acceleration of doing that quickly.

I often talk about this with the National Governors Association. All of us are dealing with a workforce shortage. It starts with parents telling a story about manufacturing. If you are of a certain age, like me, we were all told that manufacturing jobs were going overseas and, unless we went to college for an office job, there was going to be nothing there. I would argue, in many cases, that led to a lot of debt and people choosing careers that weren’t best suited for them. I think we are now getting back to the point where a lot of different pathways are opening up.

One of my best friends is a Macalester grad who spent a lifetime being a great carpenter. His retirement is better than most.
It’s not an either/or. The humanities matter, a liberal arts education matters. We should be teaching our students, especially in our public elementary and high schools, how to be thinkers for the future, how to be problem-solvers, how to be on time and do things, and lock them into lifelong learning. We all know they are probably going to switch professions seven to nine times in their lifetimes.

There’s an old phrase that talks about every employee should be somewhat of an entrepreneur so he or she can go up to the boss and say, “If we do it this way, it will save you time and money.”
Absolutely. And it’s important they have the skills to do it.

Most manufacturers feel an acute challenge with recruiting and retaining skilled employees. How does your administration read the situation?
There are a lot of good ideas out there. We certainly don’t believe, as an administration, that we are going to reinvent the wheel. We believe in opening up pathways for things that are already there. There are a lot of smart people. They may be in technology-related sectors or they may be in manufacturing. We just need to make sure we are being nimble enough to see what that future workforce is going to look like and make sure we’re training for it.

And then we have to make sure we understand the demographics we’re up against. As the cold, agrarian state we might be known for, Minnesota is one of the few Upper Midwest states that actually has an influx of people coming in. This is about quality of life and services. We need to attract people to this state, but the one thing we cannot afford to do is let any of our existing folks fall through the cracks. I say this because 70 percent of our workforce is going to come from communities of color. In engineering, and in some of these high tech manufacturing roles like robotics, white men make up 80 percent of those jobs and white women make up 19 percent. That tells you something.

Local manufacturers talk a lot about K-12 educators and parents continuing to emphasize the four-year track. They may not fully understand what the manufacturers are saying, the kinds of rewards involved, and the well-paying careers that can be found after a two-year degree. Has that been your experience when talking to people around the state?
Absolutely. It’s a hard problem for several reasons. Again, if you’re of a certain age, until recently parents didn’t know these education alternatives were options. We, as a state, have to start thinking about using social media in different ways to provide those opportunities for students at a younger age.

By the time students start a career, which we usually expose them to in 9th or 10th grade, it’s almost too late. They need to start getting this in middle school or later on in elementary school through a Career Day type of scenario to know what’s available. After four years in an apprenticeship and then a couple years of experience, there are sheet metal workers making about $105,000 a year, and they are doing incredibly detailed work on places like our U.S. Bank Stadium.

Nothing would make me happier if my kids came home and said, “You know what? I think I want to pursue a trade. I’d like to pursue manufacturing,” or “I’d like to know how to do this.” I think it’s that exposure and manufacturers letting us know what they need from us.

It’s hard to get that out of manufacturers and get that collaboration with our two-year colleges so that students know where to go and what to do.
We, as a state, need to be partners in that. Plasma welding is a great example at HitchDoc out in western Minnesota. They would have to send their folks to Chicago, I believe, because they couldn’t get enough people. The state needs to be able to bring that to them. If we have the expertise, the training, and the capacity, we can partner together to bring them in.

Manufacturers are looking to compensate their work shortage by improving productivity at their plants through operational improvements, technological improvements, and by developing the leadership skills of their current employees. Here’s where we go into robotics. Now, some people are criticizing these manufacturers saying they are eliminating jobs by using robotics. I have always thought they are just upgrading the job. Somebody has to make the robots, and somebody has to maintain them.

The wages go up when your skills go up.
The role of work and the nature of future work is one of the great challenges facing us. I know there is a nostalgia. I saw it in the presidential campaign when a candidate said he was going to bring back coal jobs. Well, even if we choose to use coal again, it’s not going to be mined by hand and it’s not going to create the jobs that were there in the 1970s. It’s the same thing with manufacturing. But, it doesn’t mean that there is not that need, as you said. Making an F-35 fuel pump involves taking a very expensive piece of industrial grade aluminum block and not screwing it up. A lot of these folks are doing on-the-job training, they’re able to get that. I don’t think we can run from the future. We can’t tell people that there’s somehow something inherently evil about folks trying to save costs in manufacturing. American workers are still, by far, the most productive workers in the world.

I think this is where I’m going to make the case to businesses: enhancing the capacity to keep those talented employees is going to be really important. “We can’t do paid family leave.” Really? You like retraining people all the time? You like having people come in and out? What does that cost you?

What’s the best use of Minnesota’s Trade Office for manufacturers?
I was just talking to other governors at the National Governors Association about how we can work together. This is not about how we compete against other states—that’s a zero-sum game. The great secret that we’ve always known is Minnesota workers have incredibly high work ethic. It’s not misplaced pride.

It’s pretty obvious you’re very optimistic about Minnesota’s future.
I am, because the past shows me that I should be. I do believe we have to take on these challenges. We cannot allow an aging infrastructure to put us at a disadvantage. We cannot allow our worst-in-the-nation gap between students of color and white students to continue on. And we can’t continue to see labor in the workforce at odds with management, ownership, and the business community. We’re in this together.

Bemidji counselors and school administrators have created a much-admired program…

Optimistic manufacturing executives underscore that improved productivity is the way…