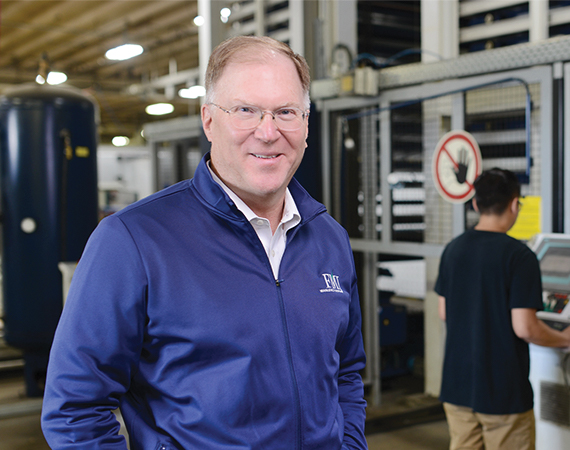 James Seifert is an attorney with the Fafinski Mark & Johnson law firm in Eden Prairie. A New Ulm native and former state legislator, Seifert has been practicing for more than 30 years and has focused much of his work on manufacturing and technology.

As a former state legislator, you’ve seen the political process from the inside and know how things get done. With the session in full swing, what advice would you give manufacturers about having their voices heard at the Capitol?

James Seifert: It’s absolutely critical that manufacturers establish relationships with legislators. They should know who they are. They should know what their interests and policy priorities are. And they should ideally have at least one face-to-face meeting with a legislator or senior staff member. It’s the people who show up who have the power. It may be as simple as a letter, or a well-thought-out email that can make a difference. Or even it may be testifying before a committee.

This year, because of COVID, we saw a $2 billion state surplus turn into a $4 billion deficit. So far, Gov. Walz has not implemented expense reductions. With variable obligations with our agency programs, particularly Health and Human Services, that implies a significant tax increase. Which is going to be an economic burden on manufacturers that they have to understand in detail, and they should put their viewpoint before their legislator. If they don’t, silence is often interpreted as agreement. They should actively participate in the process.

You attended several Enterprise Minnesota focus groups as part of our annual State of Manufacturing® survey. The elephant in the room during those conversations was the impact of COVID-19 on manufacturers. What was your takeaway from those discussions?

James Seifert: At least for now, we’re not dealing with a disaster scenario principally because of the Paycheck Protection Program. I think there were a lot of firms that applied for and received the PPP money and used it appropriately. Now, with the advent of the vaccine, that program has worked exactly as it should.

It was probably an artificial environment we were dealing with this year, which mitigated the effects of COVID. The question is whether that’s going to be enough to get us through this next period until the vaccine is fully available.

Thirty percent of manufacturers are genuinely hurting. I think another 30% are treading water. And the rest are actually thriving in this environment because they’re seeing demand, or discovering new markets, and their costs are lower with people working from home. Minnesota manufacturers are fairly resilient.

Given your experience in the legal field, at the legislature, and working with so many manufacturers, what have you learned about the things that produce success in manufacturing?

James Seifert:  I started my career in manufacturing with American Hoist & Derrick in 1985, and that was pre-internet, pre-personal computer, pre-cellphone. In looking back, I’m struck by how little the essentials have changed. Manufacturers still succeed by focusing on innovation and customer service. If you do either one of these wrong or poorly, you’re not going to be a manufacturer for very long.

And if what you do doesn’t support one of those two critical pillars of manufacturing, that’s when the trouble begins. If I had to boil it down, it would just be those two things: be different and take care of your customer. You can survive darn near anything if you do those two things well.

In what ways can a lawyer or a law firm help manufacturers beyond just contracts and legal advice?

James Seifert: Lawyers offer a unique perspective regarding risk mitigation. I think we can see around the corner because people come to us in their time of need. And what we deal with are very complex problems that we ultimately solve.

We deal with the overall enterprise risk in several ways, whether it’s people issues or commercial relationships. We do an awful lot of planning, from actual operations planning to corporate governance planning. Our firm is uniquely positioned because we have the capability to give holistic advice relative to second-, third- and fourth-generation succession planning.

We have a very robust wills, trust and estate practice that allows the smooth transition of successful manufacturers from one generation to the next. That can mean three people, or it can mean a 300-person manufacturing operation. We service that range of manufacturers when they need to pass on to the next generation and don’t want to sell the business. So, that’s really how the law firm and lawyers, us specifically, can help manufacturers.