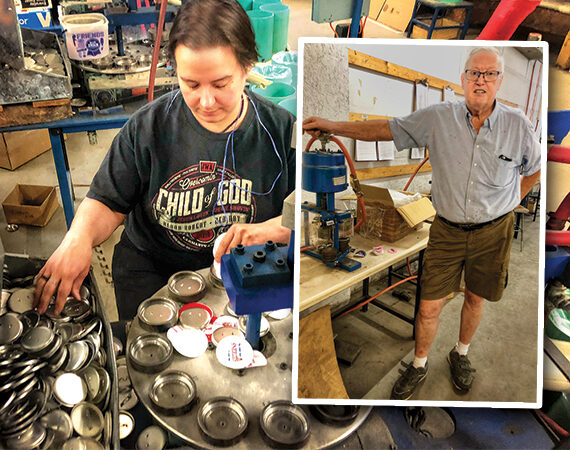 Bestway Promotions has been a leader in the button industry for decades. The mastermind behind it all is Mitch Bublitz, a southeastern Minnesota native who is ready to retire.

It’s summer festival season and a national election is on the horizon.

That traditionally has meant one thing for Bestway Promotions: plenty of work.

Bestway, based in Houston, Minnesota, has been one of the nation’s largest manufacturers of buttons, the kind you get when you sign up for a raffle at the county fair, or the kind you see affixed to the shirts of campaign volunteers knocking on your door.

The company is the life’s work of Mitch Bublitz, a machine tool crafter who came to button making on a slightly unusual path. But more on that in a moment.

Business may be a tad slower these days because of the coronavirus pandemic, but Bublitz still loves to give tours of his shop, tucked neatly on the northern edge of a town of 900 people. In its heyday, Bestway would have dozens of people busily punching circular tins into shiny buttons. Today that number is far lower, though the company is still among the largest producers in the country.

“So, this one is for the La Crescent Applefest,” he says, adjusting his eyeglasses and peering at a future button on a computer screen. “Sometimes it’s something some kid came up with. Sometimes it’s folksy or grassroots.”

But while he’s had success in the button world, he’s also ready to retire. And this season’s orders aren’t as robust as past seasons — the pandemic has canceled festivals and fall sports, both surefire sources of button orders. But Bestway is still cranking out buttons, and Bublitz is still helming it all, helping apple festivals and political candidates add a little all-American pizzazz to their endeavors.

Bublitz was born and raised in the tiny town of Hart.

“You go up the road about 10 miles, take a right on highway 43, and it’s a wide spot in the road. There’s one cemetery on this side of Hart, and there’s one on that side of Hart. I have relatives in both.”

After attending Winona High School, he enrolled in technical college intending to study auto mechanics. But there was something about the machine shop classes he took in high school that resonated with him.

“When it came time to sign up for tech school, I signed up for machine shop,” he says. “On the first day, class was so packed I had to stand in the back of the room. But by the end of the term, there were only eight of us left. … I graduated as a tool and die man.”

After five years and several jobs in the industry, he was ready to start his own company.

“I went into the woods and cut down 33 oak trees, hauled them to the sawmill and sawed them into two-by-sixes,” Bublitz says. “Then I went to Tri-County Electric and bought some used telephone poles. I put up my own building. Took me all summer.”

And that first business, of course, was manufacturing buttons. But why?

Bublitz says he went to a ski hill once where paying skiers were given buttons to access the hill.

“I didn’t have a lot of money, but I bought the damn button,” he says. “And I kept watching these people scoot down the hill and fly through the air. So, that was my first encounter with a button.”

In his oak-tree building he also built his first button-making machine, a machine that still sits in his shop, ready to go if needed (though it won’t be because he has dozens of other self-built button makers that are faster and pump out more buttons in a fraction of the time). The design of that first machine was the foundation for all machines that came after. A motor on top powers a piston-like puncher that sandwiches together two pieces of metal and a design.

“This machine here applies a laminate or plastic covering,” he explains, motioning to its various components. “It’s printed in there and laminated here. It’s die cut here, capped there and out it goes.

When it gets 50 pieces in a bag, it will automatically change the bag.”

This is the system that cranks out, literally, millions of buttons every year.

After building his button-making empire into what he says was “the world’s third largest,” Bublitz sold the company to Tandycrafts, which was hoping to leverage several similar companies into one massive button producer. After some legal tussles, Bublitz says he parted ways with Tandycrafts and started a new button-making company, in which he invested $600,000.

Everything is in place, however — from front-end design software to those patented button makers — for anyone who wants to step in.

Van Technologies used its COVID downtime to upgrade its ISO…

Mural, Mural on the Wall

After a few months of Zoom, it might be time…