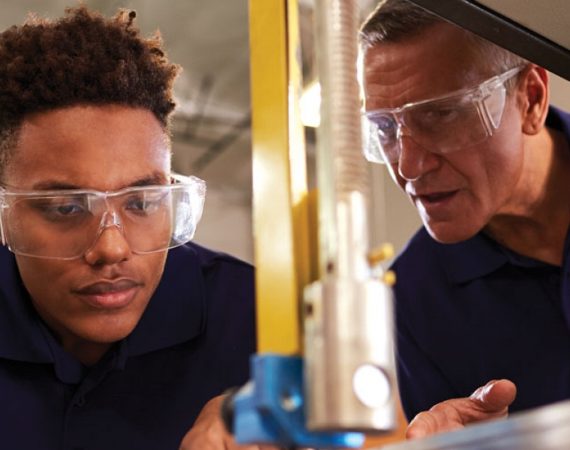 The State Of Manufacturing 2019 – Doing More With Less

Minneapolis (May 14, 2019) – Minnesota manufacturers continue to thrive in a strong economy, but a severe worker shortage overshadows their growth and profitability. According to the 11th annual State of Manufacturing®, a comprehensive survey project sponsored by Enterprise Minnesota and its partners, manufacturers have retained their near-record levels of optimism since 2018 while also taking steps to alleviate the negative impacts of the ongoing worker shortage. More than half (54 percent) are focused on maximizing productivity, with efforts such as automation and continuous improvement, to combat the worker shortage.

A whopping 93 percent of executives reported feeling confident about the futures of their companies, a near-record 59 percent expect increases in gross revenue and 45 percent project increases in profitability. Fifty-eight percent expect employee wages to increase this year. However, executives aren’t as enthusiastic about the performance of the U.S. economy, with only 49 percent predicting an expansion – that’s a 15-point drop from the 2018 State of Manufacturing survey results.

At 48 percent, nearly half of executives pinpointed the inability to attract qualified workers as the biggest impediment to growth, a 14-point increase since 2017. Seventy-one percent said the worker shortage made things difficult, particularly for rural companies (76 percent) and larger companies with revenues of more than $5 million (84 percent). Faced with this, most manufacturers say they are addressing the worker shortage with efforts to maximize productivity and 76 percent would emphasize improving “people development and process improvement equally.” Of concern, however, there is little investment (6 to 13 percent depending on company size) by companies to provide leadership training for employees. Yet, notably, respondents said that maximizing productivity is second only to “finding new customers” as an “important driver of future growth.”

Some results varied widely depending on the geographic region of the state, with the western half reporting greater pessimism about the economy. No matter the region, however, the costs of providing health care coverage continue to be a major concern among executives, as it has for all 11 years of the survey.

“Despite economic uncertainty, Minnesota manufacturers are thriving and feeling confident about the futures of their companies,” said Bob Kill, Enterprise Minnesota president and CEO. “But the biggest factor casting a shadow on that enthusiasm is the ongoing worker shortage, which has no end in sight. The organizations that can weather the shortage and continue their strong growth will be the ones that have leveraged the appropriate combination of automation, productivity strategies, effective leadership, team development and strategic planning.”

The results of the survey will be presented at a series of regional events throughout Minnesota from May 14 to June 20 in Minneapolis, Bemidji, Owatonna, Buffalo, Alexandria, Willmar and Duluth. Click for the full 2019 State of Manufacturing event schedule.

Rob Autry, president of Meeting Street Research has been pollster for all 11 years of the survey. Throughout the month of March, he conducted telephone interviews with more than 500 manufacturing executives representing a geographically proportional cross-section of Minnesota. The survey was complemented by 13 focus groups of manufacturing leaders led by Enterprise Minnesota. The poll has an error rate of +/- 4.9 percent.

About Enterprise Minnesota
Enterprise Minnesota is an ISO 9001:2015 certified consulting organization that works with medium and smaller manufacturing enterprises to help them compete and grow profitably, and also serves as the “voice” for the industry, raising visibility and appreciation for the value manufacturers provide our communities and the state’s economy. Our affiliation with the Manufacturing Extension Partnership (MEP) further positions us to offer clients leading-edge services to improve manufacturing operations and strengthen business.

In the last five years alone Enterprise Minnesota has helped over 510 Minnesota manufacturing companies gain access to strategies that increase efficiency and promote growth. Resulting from the organization’s work, clients have realized a total positive economic impact of over $696 million in sales, reduced costs by over $131 million, invested over $289 million in capital expenditures and modernization and added or retained over 6,600 jobs.