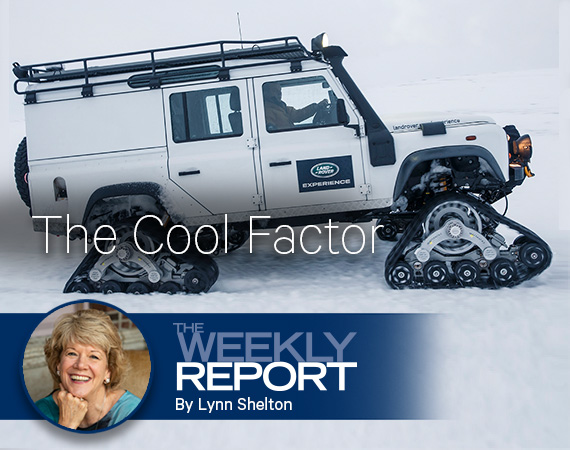 After 20 years of working around manufacturers at Enterprise Minnesota, it probably goes without saying that I can get jazzed about manufacturing back-stories in a way that would come as a complete shock to the high school version of myself.

Manufacturers can be cool people. They are often start-from-scratch entrepreneurs who have made something of themselves by making things. The level of sophistication in their plants comes as quite a surprise—even shock–to first-time visitors. And besides driving their community economies with stable, well-paying jobs, they are often first-class corporate citizens as well.

Among the coolest is Glen Brazier, the founder and owner of Mattracks in Karlstad, MN, a town whose 760 residents live midway between Thief River Falls and the Canadian border. His story will be told in the next issue of Enterprise Minnesota® magazine by Sue Bruns, a retired high school English teacher who works from her home in Bemidji.

She describes how Mattracks manufactures rubber-track conversions for pickups, SUVs, ATVs, tractors, military vehicles, and more. With more than 150 track models, in over 40 tread styles, Mattracks this year will ship the 100,000th track system, which it sells in more than a hundred countries on all seven continents.

Brazier started with just six employees; today there are 50, and he expects to need twice that many over the next several years. Sue says that while hiring and retaining quality workers can be challenging in the hinterlands, half of his employees have been there for more than ten years, and eleven, for more than 20 years.

Brazier also contributes to Karlstad by helping organize and fund its annual Kick’n Up Kountry music festival. He has now developed the 360-acre site, just outside of Karlstad, has camping hookups to accommodate at least 200, and space for the 15,000 concert goers. He moved a 100+-year-old church from Pelan (northeast of Karlstad) and the old Karlstad railroad depot onto the property and offers the church for non-denominational services, weddings, and other events.

To further enhance the festival experience, Brazier created his own Adventure World Tour at the site, featuring a hand-made train engine that pulls three passenger cars (all on Mattracks). Sue describes it thusly: “As riders wind along the Baja route through woods and cattails, mechanical surprises appear and spring out – everything from a raptor, a T-rex, and a huge spider to a spaceship and space alien eggs. (A pirate ship is in the plans.) The tour guide and engineer is Glen Brazier himself, whose enjoyment of the task would lead one to believe his sole purpose in creating Mattracks was to see the smiles on the passengers on this Karlstad amusement park ride.”

Be sure to get your copy of this issue of Enterprise Minnesota magazine by subscribing on our website.

January 27 – State of Manufacturing regional event: Moorhead
Join us in Moorhead as we bring the State of Manufacturing on the road. Great networking opportunity for manufacturers and industry stakeholders as we discuss the SOM results and what they mean for West Central Minnesota. In-person at the RiverHaven Events Center, Moorhead  Learn more and register

February 9 – A Model for Manufacturing Excellence Using ISO 9001
ISO Certification and audit expert Keith Gadacz will be discussing the concepts of the business management system ISO 9001:2015 and how it can take your operation from average to excellent. Online via Zoom  Learn more and register

February 16 – State of Manufacturing regional event: Owatonna
Join us in Owatonna as we bring the State of Manufacturing on the road. Great networking opportunity for manufacturers and industry stakeholders as we discuss the SOM results and what they mean for Southern Minnesota. In-person at the Owatonna Country Club, Owatonna  Learn more and register

February 24 – Creating a Culture of Continuous Improvement
Join us IN PERSON in North Branch, MN for a manufacturing workshop with expert Ally Johnston on ways to integrate lean thinking throughout your organization by developing a culture of continuous improvement. At Lakes Region EMS in North Branch  Learn more and register

Gov. Walz bonding proposal includes $1M for manufacturing program expansion
Lake Super College in Duluth has been targeted for $1 million to develop plans to expand its Integrated Manufacturing Program, which is part of a larger bonding proposal that includes $475 million for MN colleges and universities. January 18, Fox 21 News  Read more

Enterprise Minnesota is dedicated to helping Minnesota manufacturers grow profitably. If you are interested in receiving The Weekly Report to your inbox, please visit our subscription page.