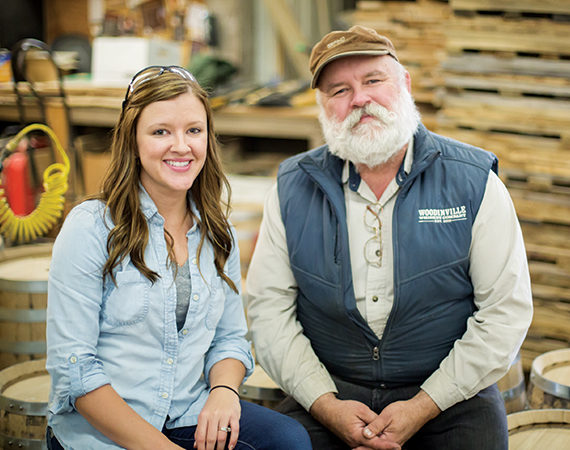 Black Swan Cooperage competes in the surprisingly competitive world of making barrels for distillers and brewers.

The scent of freshly planed white oak hangs in the air at the Black Swan Cooperage in Park Rapids, Minnesota. Heidi Korb, co-owner and president of the barrel making plant, oversees the operation.

Stacks of cut and planed white oak boards wait to be shaped into barrel staves (the boards that become the barrel). Tongue-and-grooved hexagons will next be rounded into barrel ends or “heads.”

The oak logs from Minnesota or Wisconsin that get transformed into the barrel staves will flavor and mature the spirits of hundreds of distilleries across the country. Saws and planers hum and buzz as local craftsmen quarter the big logs and then cut them into 40-inch lengths. The boards must be straight and without knots or knot holes. The crafters plane them, remove the bark, and shape the staves, tapering the boards on top, bottom, and both sides.

Korb, one of very few female coopers (barrel-makers) in the U.S., learned the trade from her father, Russ Karasch, who worked as a cooper in the St. Paul area for 20 years before starting a business of his own. As a teenager, Korb worked with her father, learning each part of the barrel-making process. After earning an associate degree in marketing and sales from Ridgewater College in Willmar, she formed a partnership with Brian Lee, then owner of a distillery in New York, and Black Swan Cooperage was born. The name, indicative of something very rare, is appropriate for a cooper, as there are only about 40 cooperages in the U.S. today, and even more fitting for a woman cooper. The market for barrels has grown considerably, but the number of coopers has not.

Black Swan first opened in 2009 in Eagle Bend, Minnesota. Two years later, Korb relocated the company to the industrial park in Park Rapids. Now, in a 10,000-square-foot building, Black Swan produces around 4,500 barrels per year. It’s a small operation, Korb says, but the demand is there, and Black Swan’s reputation for producing quality barrels has resulted in sales to over 200 different distillers across the U.S., Canada, Mexico, and even Peru. The market for used barrels has also grown. Home brewers and distillers of other spirits prefer used barrels not only because they are less expensive, but they also come with tones of flavor they’ve picked up through previous distillings. Korb says several used Black Swan barrels have been sold to distilleries in Europe.

Until two years ago, Korb bought staves from several different vendors, but white oak is getting harder to find. Diminishing supplies throughout the U.S. make it difficult for stave makers and coopers to obtain enough prime white oak to meet demands, and recent weather conditions have made it difficult for Minnesota loggers to harvest the wood.

In 2017, Korb expanded Black Swan’s operation to include stave making. By investing in more equipment and adjusting the production process and schedule, the company now controls both the quality of wood and the craftmanship of the staves.

The art of barrel making has not changed much in over 2,000 years. Historians trace the barrel as far back as 325 B.C. and credit the Celts with its origin. The use of staves and the art of bending them into water-tight containers is remarkably similar today to the early days of the barrel. Staves are narrower at the ends, and all edges and ends are tapered so that, as the barrel is shaped or “raised,” the boards come together into water-tight seams. Twenty to 40 individual staves are required, depending on the size of the barrel. Metal rings secure the staves, with the largest ring at the barrel’s center (bilge) to determine the desired circumference of the barrel.

Black Swan produces barrels using three types of staves—traditional, cross-grooved, and honeycombed—in sizes ranging from 5 to 53 gallons. Developed by Korb’s father, cross-grooved and honeycombed staves have been patented by Black Swan. Both are customized methods of cutting or drilling into the inside-facing staves to expose more of the wood’s end-grain. Barrels made without grooves or honeycombs are “traditional” barrels.

Black Swan, Korb says, “is the only cooperage to use end-grain extraction.” Because more wood surface is revealed from grooving or drilling into the staves, more flavor tones are released from the wood’s natural sugars, and maturation of the product is accelerated. Black Swan’s website boasts, “Our staves provide the largest (patented) surface area of any stave on the market…[allowing] for faster extraction of oak barrel components…. We have been accused of having the sweetest whiskey barrels on the planet.”

Once the barrel staves are harnessed by the rings, the barrel is placed in a “hot tub” for about 45 minutes—a process Korb calls “water bending,” as it makes the boards more pliable. It also releases tannic acid from the oak, reducing the harsh notes in the wood and turning the clear water in the tank to blackish-brown.

After the barrels have been soaked and the staves have expanded, the splayed staves on one end are brought together with a wire rope or cable device to form the full barrel shape. No glues or adhesives are used; the staves come together in water-tight seams. Black Swan barrels are then raised before they are toasted and charred. During this heating process, a slow fire of oak shavings toasts on the inside of the barrel. The toasting further enhances the flavor tones of the oak and releases more tannins.

Once the barrels have been toasted and charred, steel hoops are placed to maintain and secure a barrel’s shape. Steel strips purchased from a vendor in the Twin Cities are cut, curved and riveted to fit the barrel. The barrel is then capped as the “heads” or ends are put into place. The rims of the round heads are beveled to fit snugly onto the barrel tops and bottoms. Finally, the bung hole is drilled by hand, with the same type of tool used hundreds of years ago, and a plug is inserted.

Black Swan barrels could easily be stamped “Made in Minnesota” from acorn to distillery. Most of the white oak harvested for staves comes from Minnesota, harvested by Minnesota loggers. The metal rings used to shape the barrels are crafted by an ironsmith in central Minnesota. The steel strips are also made in Minnesota and then formed into barrel hoops by Black Swan’s craftsmen.

With the rising popularity of craft distilleries, the demand for well-crafted barrels is not about to taper off any time soon. The market is strong, and the small company’s 11 employees will continue to make staves and barrels to meet the demand. But coopers and stave-makers, including Black Swan, face one main challenge: finding enough white oak to build the barrels in a world where demand is growing and forests are declining.

After a decade at Stratasys, entrepreneur Mike Block took his…