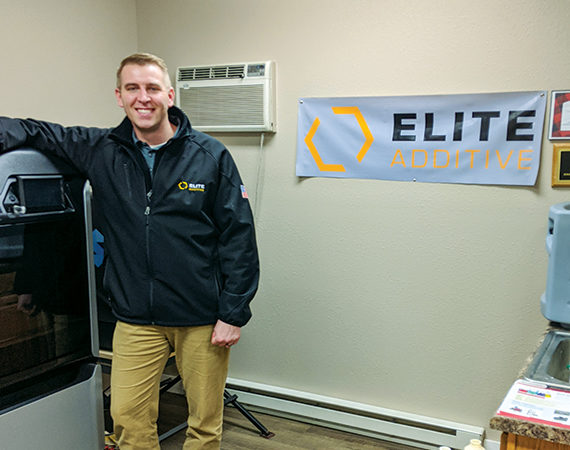 After a decade at Stratasys, entrepreneur Mike Block took his expertise back to Bemidji.

As a student studying design technology at Bemidji State University in 2003, Mike Block’s first exposure to 3D printing opened up limitless possibilities. “It was amazing,” he recalls. “You could design something on the computer, send it to a printer, and it physically made an object!” He wondered what the product development landscape looked like for this technology and found that everything seemed to be transitioning to additive manufacturing (i.e., 3D printing).

After graduating from BSU in 2006, Block worked as a machinist for Fastenal and then gained experience and expertise in Additive Manufacturing (AM) through 10 years at Eden Prairie-based Stratasys, one of America’s innovators in 3D printers and production systems. During Block’s ninth year at Stratasys, he trained college and technical school students in 3D printing technologies.

Meanwhile, Block was looking for a way to move his family back to northern Minnesota and continue his career. After Stratasys accepted his proposal to work remotely from his garage, Block re-located—first to Grand Rapids and then to Bemidji in November 2017.

His business idea was to print 3D parts for manufacturers upon request or for individuals with an idea to bring to the market. The interested party could come to Block with a napkin sketch, and he’d refine it as a CAD design and then provide an affordable platform to produce a prototype.

Before he even purchased his first 3D printer, Block initially pitched his idea in Bemidji at a Launchpad event, which is a weekly meeting of entrepreneurs, business owners, investors, and advisors—people with ideas.

Attendees at the Launchpad meeting were intrigued. “This was something they hadn’t had the opportunity to work with before,” Block says, “but they saw the vision for it.”

Although 3D printing dates back to the 1980s, the concept and the technology were not common to the general public until the mid-2000s. Many manufacturers are still unfamiliar with its potential applications.

Encouraged, Block put together a business plan, and, with the help of the Northwest Minnesota Foundation and financial backing from Security Bank USA in Bemidji, he started ELITE Additive while continuing his work for Stratasys.

During a six-month transition, Block trained his replacement at Stratasys and has maintained a relationship with the company’s channel network. “They call us into presentations so we can try to reach whoever is interested,” he says.

For about five months after starting ELITE Additive, Block was a one-man operation, focusing on small jobs. His first parts order was a $62 rain sensor cap for a boat company—not a huge money maker, but it was satisfying to work with a local company and eliminate expensive tooling costs. ELITE could 3D print the part on site.

To expand his customer base, Block used social media to connect with companies that use 3D printing services. He posted marketing videos, sent out introductory letters through LinkedIn, made countless phone calls, and relied on word of mouth.

Initially, many of his clients were local or regional, “but this company can be world-wide,” Block says. A client can send him an email with a file attached; EA can print the object and ship it to the client. Gradually, Block landed more parts orders and established strategic business partnerships, allowing him to expand the range of services EA could provide.

The original vision had been to provide parts for manufacturing, but Block recognized that manufacturers needed advice and guidance to incorporate Additive Manufacturing into their processes and assistance with specific post-printing needs.

“There’s a bottleneck after the printing process,” Block says. A company might have 30 to 40 printers with capabilities of producing hundreds of parts, but 3D printed objects don’t usually spring from the printer ready to use. Support pieces required for printing must be removed; surfaces need smoothing or refining. While more manufacturers were moving to 3D printing, the finishing process was slowing things down. Block’s expertise could help manufacturers improve the quality of AM parts and introduce them to mass finishing and automated finishing options.

He decided to revise his business plan, expanding it to help companies that already owned 3D printers and adding consultation services along with sales and marketing.

“The industry is advancing by introducing more materials that can be utilized in the printers,” Block says. Today’s printers work with a wide range of materials: 25 to 30 different polymers, thermoplastics, acrylic based plastics, certain types of rubbers, and 15 types of metals. Different materials require different throughput processes, and with specialized partners and subcontractors, Block says, ELITE

Additive can now tackle just about any project sent its way.

“Our strategic partners help us serve the needs of customers from start to finish without the huge expense of equipment.” And ELITE Additive’s professional consulting division (“The Additive Guys,” www.theadditiveguys.com) advises companies on printing and finishing needs.

ELITE Additive has partnered with Hammond Roto-Finish and Abrasive Finishing, companies that specialize in various finishing methods from abrasive and vibratory to water tumbling and more. ELITE is also a sales rep agency for Hammond, adding sales and marketing to the company’s services.

As the business concept expanded, Block moved the operation out of his home and leased a workspace in Bemidji from LaValley Industries, for whom he became an on-demand resource. Today, ELITE has 24 different accounts in fields that include automotive, dental, aerospace, and consumer products, with room to grow in industrial and medical applications. Block estimates that 90 percent of his business involves designing, 3D printing, and consulting. Roughly 5 to 10 percent is equipment sales, which he predicts will grow.

Block believes the future for 3D printing is in full manufacturing. “The industry is moving to more autonomous manufacturing. We may get to the point where we can say, ‘Hey, Google’ or ‘Hey, Siri. Build me a cup from the Cloud,’ and that could happen even without someone sitting at the printer. The industry has the ability to be the Amazon.com of manufacturing.”

Under ELITE Additive’s revised plan, Block sees evolving opportunities for his company and for manufacturing. “It can be intimidating approaching Additive Manufacturing for your product development or manufacturing needs,” he says, “so with ELITE, there’s no need to worry. We can make life a lot easier.”

Black Swan Cooperage competes in the surprisingly competitive world of…