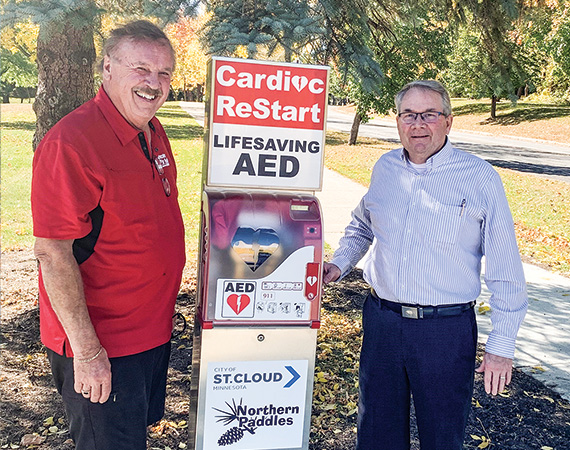 Joel Vogel, then 46, was at home in St. Joseph when he started feeling heart attack symptoms. In the ambulance, he was given nitroglycerin three times to keep him alive. Vogel has since recovered, thanks to emergency surgery that cleared his fully blocked “widow-maker” artery and implanted six stents. It was a wake-up call for Vogel and his friend, Rich Feneis.

Feneis lives on the Mississippi River in a secluded part of Sartell. Vogel’s health scare in 2004 made him realize that if he or a neighbor faced a similar situation, they might not live long enough for paramedics to help. When Feneis retired, he joined Vogel’s efforts to increase awareness about sudden cardiac arrest and raise funds for automated external defibrillators (AEDs) in the St. Cloud region.

Thanks to their nonprofit Advocates for Health — and the partnership of several central Minnesota manufacturers and organizations — the area now has 119 new smart AED cabinets. “Our vision is to save lives and make AEDs as affordable as possible so we can install as many as possible,” Vogel says.

That vision includes installing AEDs in rural areas, where ambulance response times are longer. Time is of the essence during sudden cardiac arrest. Every minute that someone does not receive rapid defibrillation, his or her chance of survival drops by 7% to 10%. Nearly 90% of the 356,000 out-of-hospital cardiac arrests in the United States are fatal, according to the American Heart Association. But when people have their hearts shocked back to life by an AED, they have a 70% to 80% chance of survival.

That makes it critical to have AEDs nearby and accessible, Feneis says. Yet the devices often are located inside of locked buildings or are hidden from plain view. And 35% of the time, they don’t work due to bad batteries or expired pads, according to national research.

While Vogel initially raised money for AEDs through Mended Hearts, he and Feneis decided to do more. They applied for funding from the CentraCare Health Foundation, but Feneis’ plan to put an AED in his garage and leave it unlocked for neighbors to use was rejected. “I’m the worst guy to say no to,” Feneis says. “I will figure out a way to do it.”

Feneis found an Ohio parks department that recently installed climate-controlled cabinets for AEDs that keep them working even in extreme weather. He added the technology to the grant proposal. CentraCare agreed to a pilot program in which the partners would raise matching funds to install a similar cabinet in Feneis’ neighborhood. In a week, friends and neighbors raised the money.

Ready to do more, Vogel and Feneis returned to see if CentraCare’s foundation would back a bigger campaign. They launched Advocates for Health in 2019 to support this work. Then they started lobbying any government entity, community organization, and business they could find to persuade them to install outdoor AEDs.

The AED Smart Monitored Cabinet System costs $7,195 and contains many features that makes it an easy sell. Housed in a stainless-steel structure, the cabinets are powered by a 24-volt DC converter with a rechargeable backup battery that maintains essential functions during power outages. LED lights provide visibility at all hours, and sensors alert emergency responders if the door is opened or the AED is taken. In addition, the sensors send alerts if the cellular connection isn’t working, the backup battery gets activated, or the temperature is too high or too low inside the cabinet.

While promoting the AED program to the Holdingford Lions Club, Vogel generated interest in the AED smart cabinets — and more. Bob Warzecha, president of Two Rivers Enterprises, a stainless-steel manufacturer in Holdingford, wanted to get involved with making the cabinets locally.

Feneis was ready to explore new manufacturing options. He was having issues with the manufacturer. Feneis invested his own money to form the company Cardiac ReStart. It serves as the developer and supplier of the AED system — work that is difficult for nonprofits to do — while Advocates for Health builds awareness and advocates for installations, Feneis says.

In late 2020, engineers at Two Rivers designed a free-standing AED cabinet that also could be mounted on a building, says Jessica Wells, general manager. Manufacturing and assembly plans were progressing nicely until the effort hit an obstacle. The cabinets needed an electrical certification required to continue manufacturing and installing the units, to the tune of $12,000-$14,000.

Wells connected Feneis with Dawn Loberg, an Enterprise Minnesota business development consultant who works in the area, to see how the team could overcome the costly certification roadblock. Loberg then connected Feneis with the Initiative Foundation, a Little Falls–based economic development organization that serves 14 central Minnesota counties. It provided $5,000 in technical assistance funding to help pay for an Electrical Testing Laboratories (ETL) certification.

“We’re structured in a way that focuses on economic development, community development, and generosity — and this request really hit all three of those buckets,” says Bob McClintick, marketing and communications director at the Initiative Foundation. “Providing the funding helped to knock down obstacles and increased the speed of getting these stations installed. We see that as an important investment in the health and vibrancy of the communities we serve in central Minnesota.”

Feneis also tapped into his business connections to ask Nova Flex LED in St. Cloud to solve challenges with the cabinets’ lighting. Nova Flex makes all custom lighting, so its staff could easily fine-tune the LEDs’ length and color to suit the cabinets, says company president Jordan Onnen.

Nova Flex usually works on large-scale commercial and residential projects, but employees were excited to get involved with the AED project, Onnen says. “Everyone takes a lot of pride and satisfaction in being able to help others, especially the local community. The team thought this project was really cool and local, and it’s neat to be able to get involved in something that makes a difference.”

Along with bringing business to central Minnesota, the initiative to manufacture locally allows Cardiac ReStart to build the AED cabinets more affordably, Feneis says. Cardiac ReStart also made improvements, such as swapping in multicarrier SIM cards instead of traditional cellular service to ensure consistent communication with emergency responders.

The American Heart Association recommends a three-to-five-minute response time to have a chance of surviving sudden cardiac arrest. “We started drawing three-to-five-minute circles around different areas, and there are thousands of them needed,” Feneis says. “Sporting events, trail heads, walking trails, neighborhoods, parks — any place people congregate there is a chance for a sudden cardiac arrest. That response time is a very big issue.”

For Anne Hed, running a successful company means every single…

For manufacturers, challenges are merely opportunities for success.

For Anne Hed, running a successful company means every single employee is invested in its mission. 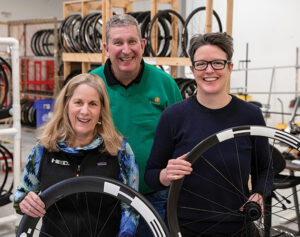