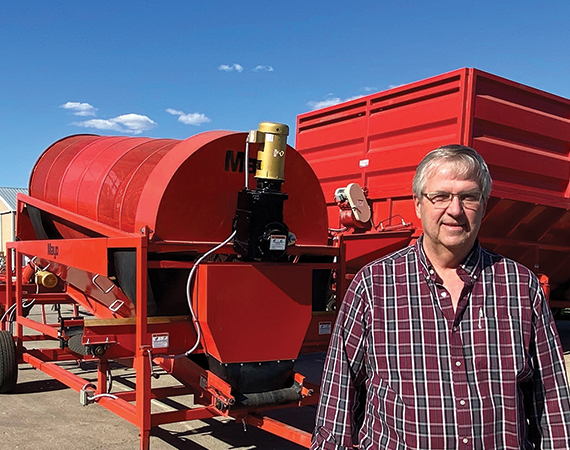 Manufacturer Mike Delisle navigates the challenges that roil his industry with a been-there-done-that aplomb that comes from more than 40 years of guiding his company through things like COVID, the workforce shortage, market fluctuations and economic uncertainties. Delisle is general manager of Harriston-Mayo Manufacturing. His family-owned company’s 80 employees manufacture high-end equipment for planting, growing, loading and storing potatoes and edible beans. They work from facilities in East Grand Forks, Minn. and Minto, N.D., and a sales-and-service dealership in Idaho Falls, Idaho.

A discussion about his company’s long history, future prospects or potential challenges will invariably return to the concept of stability — “staying the course.” To Delisle, that track includes doing what’s right by his employees, staying close to his customers and being wise enough to profit from their advice, taking a methodical approach to growth, and keeping his eye on logical strategic improvements.

Take the challenges of the pandemic economy. While many manufacturers might privately vent frustrations about the uncertainties around COVID and inconsistencies around the government’s response to the disease, Delisle is proud of Minnesota’s reactions and how his company consistently stepped up to exceed the state’s mandates.

“We struggled along with everybody else,” Delisle says. He applauded Minnesota’s aggressive response to COVID. “Minnesota, of course, came on strong. And that was okay. I prefer they did.” Harriston-Mayo complied with every pandemic-related regulation — and more. “It was our job to take all of the precautions that were suggested to outfit our facility, train our people and provide all the protective gear. We not only did the minimum, but we did the maximum, to protect our people.”

He admits the quarantines cost the company hours of production time; his plants were short-staffed for much of the past 14 months. “We could have built more and sold more if we had all hands on deck. Of course, everybody’s in the same boat, but we lost a lot of production from a sales standpoint.”

A history of adapting to customers

The company has developed the agility to grow and adapt to the needs of its planter customers, Delisle says. Mike has worked in the family-run business since he was old enough to push a broom. “I’ve swept that floor a thousand times,” he says. Mike’s grandfather, Mayo Delisle, founded the company in 1952 after working as a welder in and around East Grand Forks in the years immediately following his service in World War II. Duane Delisle, Mike’s dad, graduated from high school that same year and joined the business immediately after taking a welding course at a nearby trade school.

The two-man operation chose to specialize in potatoes because it was an abundant local crop. According to Mike, thousands of small growers rotated potatoes into other grains, wheat, corn and sugar beets. “In the ’30s and ’40s, they had learned they could store potatoes to provide food in the winters.”

Over the years, Mayo learned to adapt as the market changed to fewer but larger growers who tended to focus solely on potatoes and needed more sophisticated machinery. Typical growers then grew around 40 acres of potatoes. Today, the current grower will have more than a thousand. As the equipment got bigger, a grower could use the same machine to service 500 acres or 1,500 acres.

Duane bought the company in 1974, when Mike was a freshman in college. He and his brothers spent their summers performing the kinds of odd jobs that were allowed by the Occupational Safety and Health Administration for someone under 18 years old, but Mike says there was no immediate expectation that they would work for the company. Duane was relatively young, and the company was still relatively small. But he grew the company, built a new building, and by the time Mike graduated from college, his dad offered his three sons an opportunity to join. That need intensified in 1979, when Duane was diagnosed with Parkinson’s disease and the brothers, Mike, Mark and Dave, still just in their 20s, took a more hands-on role. Parkinson’s is progressively physically debilitating, but Mike says his dad’s mind was sharp and he provided guidance. “We were thrust into things at a fairly young age,” Mike says.

Was it a leap? “It didn’t seem like it at the time, but looking back, I guess it was. At the time you just needed to do what you had to do. Things were placed in front of you and you handled them.”

Mike and his brothers bought the company from their parents in 1983.

Their mission as new owners was to stay the course. “The company was doing fine,” he says. “We didn’t see a need to change anything.” The company still relied on long, successful relationships with customers and growth came as they expanded their geographic reach out of the Red River Valley into Manitoba, Wisconsin, Michigan, and Idaho, and then eventually throughout the rest of the U.S. and other parts of Canada. 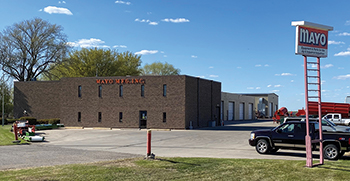 Alongside Delisle’s commitment to methodical strategic growth, he does acknowledge one misstep the company took to accommodate market changes in the late ’90s. As processers were using irrigation technologies to help guarantee a consistent crop, Mike agreed to merge with a Fargo-based company that could integrate a number of local companies. The merged company was called TerraMarc. In addition to Mayo, the merged companies included Crary Industries in West Fargo, N.D.; Harriston Industries in Minto, N.D.; and Lockwood Manufacturing in Gering, Neb.

By 2005, the combined companies had to concede that the merged companies weren’t going to deliver the market efficiencies they had desired.

“It took away some of the flexibility that we liked, and it just didn’t work out all that well,” Mike says. “We still did fine, but not to the levels that we had been used to.”

The Mayo team bought their company back into private ownership, along with “sister” company Harriston. Today, they operate as Harriston-Mayo, one company.

The marriage worked well, Delisle says, because the companies manufactured complimentary products, and the plants at just 33 miles apart were a good cultural fit. “We’re the same kind of people. We all grew up in the same area,” he says.

At age 66, Delisle admits to thinking about retirement. “If I don’t do it, the calendar will do it for me,” he says.

“I’m going to slow it down; I already have somewhat. I can’t say for sure what the future holds, though. I’m really having fun, actually.”

Succession planning, he says, will begin to evolve “fairly soon.” He says the company maintains high-quality managers. He also has a son who joined the company within the past year.

Delisle pauses, then adds, “We’ll continue to expand, but it’s going to be an expansion in what we know.” He says the company is considering several new products that could be marketed to existing companies. “We’ll stay with what we know. I think we’ll stay the course.”

What keeps him jazzed is his mission: “It’s working with these folks who use innovations to feed the nation and the world. The fun part is to help them flourish.”

Vistabule Teardrop Trailer is looking to lean up its operations…

Vistabule Teardrop Trailer is looking to lean up its operations to keep pace with sizzling demand for its niche product. 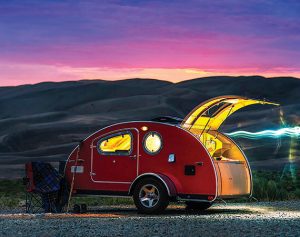