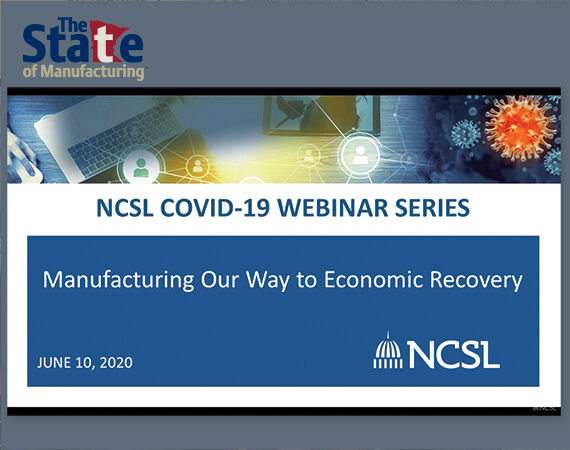 Bob Kill, president and CEO of Enterprise Minnesota, recently appeared on a panel of experts during a national webinar designed to help state policymakers understand how manufacturers are coping with the pressures of the COVID-19 economy.

The event, Manufacturing Our Way to Economic Recovery, occurred on June 10. It was presented by the National Conference of State Legislatures (NCSL) which represents state legislatures in the U.S.

Watch the recording of the June 10th NCSL webinar (youtube).

NCSL’s mission, it says, “is to advance the effectiveness, independence and integrity of legislatures and to foster interstate cooperation and facilitate the exchange of information among legislatures.”

Event hosts designed the Zoom conference to help state lawmakers see the government-imposed COVID-19 constraints through the eyes of manufacturers. According to the NCSL: “Restrictions and shutdowns caused by the COVID-19 pandemic have created a major shock in American manufacturing supply chains and production lines. As states begin to reopen, federal and state governments are working to support manufacturers as they return to full production, which might include pivoting products to combat the pandemic.”

Kill used the most recent version of Enterprise Minnesota’s State of Manufacturing® (SOM) survey to illustrate the reactions of Minnesota’s manufacturers. The SOM has been a significant research project, created and managed by Enterprise Minnesota, that gauges how manufacturers view their current challenges and opportunities. One of America’s top pollsters interviews 400-plus manufacturing executives and supplements that research with at least 13 focus groups held throughout the state.

Kill said the data illustrated that most manufacturers tend to stay calm during economic upheavals and even use the challenges to seek out opportunities to come back stronger. The COVID economy is no exception, he added.

Kill explained the unique aspect of this year’s survey is that COVID-19 forced Enterprise Minnesota to postpone the June public release of its annual SOM publication. But by the time he instructed his organization to pull back, it was already too late to cancel the survey itself. In fact, pollster Rob Autry had already completed the research.
Because of that, Kill was able to share how manufacturers reacted before and after the national emergency declaration.

“This experience, and others like it, is a tribute to how Bob has carved out a national reputation for his leadership and the accomplishments at Enterprise Minnesota,” says Lynn Shelton, vice president of marketing. “But it also is a nod to the national reputation that has been established by our SOM survey project.”

She said Kill typically makes as many as 30 public appearances related to the data. He regularly testifies before the Minnesota legislature and has even been called to testify before Congress.

“We are all proud that the SOM has become such an essential part of discussions among local policymakers and community leaders, educators, media, and manufacturers themselves,” Shelton says.

NCSL recorded the event for those who were unable to attend the live meeting. Click here to watch.

Engage Technologies uses ISO certification to show that many of…