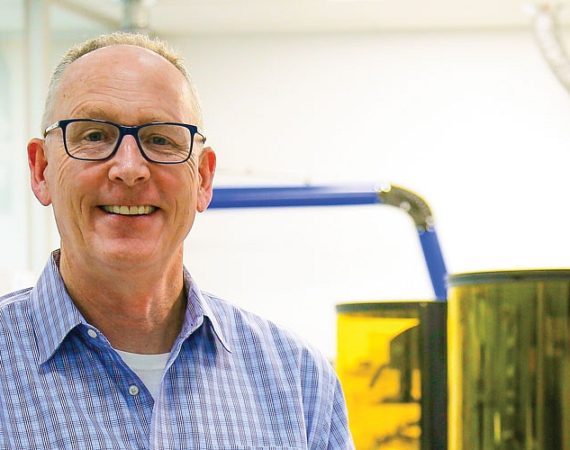 THE ARRIVAL
Kevin Hogan arrived at the Brooklyn Park headquarters of Diversified Plastics in July 2017 prepared to take the reins of the company from owner Jim Dow, who was retiring. It seemed like an ideal pairing of managerial skills and business opportunity. Hogan brought to the company a diverse résumé of executive experience and expertise. With an MBA from the Carlson School of Business at the University of Minnesota, he has served in positions at Pillsbury, Jostens, and Select Comfort, as well as several startups.

For its part, Diversified was a profitable company with a longstanding and deeply loyal workforce. Six of its 60 employees started as members of the “baker’s dozen” of employees who had been with Dow since he founded the company 40 years earlier.

Based on five consecutive years of record revenues, the company enjoyed an enviably cash-rich balance sheet. And perhaps most important, Dow, then 80 years old, seemed ready to hand it over. He joked that he had taken the company as far as his “entrepreneurial” orientation would let him, adding that it was time for “professional management” to achieve things he hadn’t. And in 2011, he created an Employee Stock Ownership Plan (ESOP) that enabled his employees to harvest some of those rewards.

At the same time, Hogan knew well how many “entrepreneurial” manufacturers will notionally acknowledge the managerial attributes that sustained their companies as startups aren’t always compatible with taking the company to higher levels of functionality and greater profitability. They might concede that willful personalities, freewheeling ideas, and decisions-by-instinct should probably yield to a management group dedicated to the single-minded execution of a well-thought-out strategic plan. But when confronted with the reality of surrendering control, many just can’t do it.

Would Dow be one of them? Hogan got his answer on the first day when Dow showed him his new office—the large corner office—from which Dow had run his company for four decades. It was empty. Dow had relocated his possessions to a tiny, closet-sized space, barely big enough to accommodate a desk. The symbolism spoke louder than words. Dow didn’t intend to spend a lot of time in-office, and Hogan would get an opportunity to transform Diversified from a sluggish lifestyle business into one that understands its value proposition in a crowded marketplace and that knew how to develop its strengths and target them toward the most profitable current and potential customers.

“Jim has worked exceedingly hard to separate from the business,” Hogan says today. “He has just done a fabulous job of stepping away and letting me establish my presence and my orientation in the business. I mean, I couldn’t have asked for a better situation.”

THE OFFSITE
Hogan planted the seeds of his strategic planning in December 2017 by inviting nine staff members—four members of the leadership team, four managers and Jim Dow—to Hennepin Technical College for a two-day offsite planning session. His mission was to build a foundation of stakeholders among employees who had grown accustomed to operating under Dow’s self-described entrepreneurial approach.

He preached the value of profitable growth. Even though Diversified had delivered five to six percent growth in recent years, the fact that the company had grown to only $13 million after 40 years in business indicated the company had not aggressively pursued revenues. Looming over the discussion was Diversified’s long-term objective to reduce the company’s reliance on two customers that were responsible for 60 percent of the company’s sales.

But Hogan had to start by creating stakeholders among the participants.

Four of them were employees with 40-plus years at the company. The others aside from Hogan and one manager, had been with the company between 10 to 15 years. Hogan knew going into the planning session one participant had described it like this: “We’re just going to go for a couple of days and then this thing will die away, and we’ll do what we’ve always done, and just play it by ear.”

“I understood the skepticism. If you’ve been in this company for 40 years and you’ve never seen a strategic plan develop and come to life, you don’t have that experience. So, I understood where they were coming from,” Hogan says.

He opted to bring in a third-party facilitator to eliminate all the interpersonal “clutter” that might derail candid conversations. He originally thought he would facilitate the conversation but quickly realized his new team seemed to scrutinize his every movement and was “trying to figure out whether or not I was a three-headed, fire-breathing monster.”

Even after the company continued its strategic planning process, there was, Hogan says, still a fair amount of skepticism about “how we were going to keep this going” and “whether we were really going to follow through on what we said we would do.”

“And that’s not unusual,” he adds, “especially, when in the past, they’d started down this strategic path, but stalled, and ended up with literally three or four pages of notes or flip charts, but it never went anywhere else.”

Borrowing from the Entrepreneurial Operation System for small businesses, Hogan began by trying to establish a 10-year revenue goal. His goal, in part, was to demonstrate to his ESOP-holding employees the value of compounding stock appreciation to their own company portfolios. They agreed that an aspirational target of 10 percent annual growth was a reasonable goal. This meant that over 10 years, the stock valuation would appreciate by a whopping 270 percent. “It helped them realize that, hey, if our share price could get to this point, I’d be pretty dang happy as an employee-owner of this company.”

The group devoted most of its time and attention to developing a three-year foundation that might frame out how to achieve things while on the journey toward the 10-year target. They targeted profitable customer growth, strengthened their internal infrastructure, and energized a strong employee base to sustain growth.

“Different revenue is going to provide different benefits to the company,” Hogan says. “So, part of our go-to-market approach was to start educating ourselves on the fact that we can look at revenue differently. And even our customer base, we can start making decisions on whether they’re the right customers or not.”

Not all revenue is profitable revenue.

REFINEMENTS
Enlisting the consultative help of Enterprise Minnesota’s Steve Haarstad, members of the management team also had to identify a market niche that would differentiate it from America’s 4,000 injection molders. If they didn’t, Haarstad said, their products would quickly devolve into markets based on price alone.

Haarstad advised that Diversified would have to identify how to be different. “It’s an important part of strategy to not just blend in,” he said. Quoting academic Michael Porter, Haarstad said, “‘Strategy is about setting yourself apart from the competition. It’s not just a matter of being better at what you do.’”

“Of course, we want to be better at what we do, but ‘it’s a matter of being different at what you do.’”

Hogan, Haarstad, and an internal team including Annette Lund, vice president, set out to define Diversified’s value proposition. Over the years, the company had developed a niche around its willingness to take on short-run production, to work on highly-engineered projects, inventory resins and finished goods that competitors would be unwilling to accommodate, and to provide in-house tooling, also unusual in the market.

Hogan wanted to emphasize a company attribute that was revealed during his own buyer interviews: Customers genuinely liked the way they were treated by Diversified’s employees. “It came through loud and clear,” Hogan says. “They even mentioned people by name.”

Hogan says it represented a definite market advantage. “Once a customer has found a supplier that they work well with, it’s a sticky business to move. It’s a pain for customers to move a tool and to re-qualify a supplier and get them to ramp up and all of that. The simple but powerful aspect of being nice to our customers is good for retaining long-term business.”

THE ACQUISITON
Last December, Diversified announced the acquisition of Pacific Plastics Injection Molding, a southern California company, as a tangible demonstration of its transformation from a seat-of-the-pants “entrepreneurial” operation to one driven by a 10-year strategy that seeks 10 percent annual growth in both revenue and profits.

Pacific Plastics had been recognized as a potential acquisition target by Jim Dow, who over 40 years in the industry had accumulated a deep Rolodex of personal relationships and quick access to industry scuttlebutt. “Once we started talking with the owner and the management team we sensed the culture and expertise could be a tight fit,” Hogan says.

“California wasn’t our top choice by any stretch given, well, it’s California, but as we saw the initial information with this company, it checked a number of important boxes,” Hogan says. His interest grew after meeting the owner, key staff, and conducting due diligence.

“More and more of the boxes got checked, and, as it turned out, once we got through our analysis, almost every box was checked.”

Hogan liked the synergy of services and customers between the two companies, as well as geographic benefits and the diversification into new industry segments. He was also attracted to some of the unique capabilities Pacific Plastics would add to its new owner, especially a relationship with a supplier in China.

Plus, Hogan says, there was overlap of markets. “From a pure business standpoint, they serve similar markets, but also some new ones.”

The Pacific Plastics acquisition also fit nicely with Diversified’s new carbon additive manufacturing capability, specifically designed for volume production. Installed this past January, the new technology provides quality approaching and equaling injection molding, but without the cost of a tool. The carbon capability provides an entirely new revenue source for Diversified and is a perfect fit for the medical device market, according to Hogan. “This type of technology is the future of our business.”

The company’s size and price were also a nice fit. “Pacific Plastics was a good size for us to bite off as our first acquisition, and, in the end, we had a cash-strong balance sheet. This is a way for cash to work better. And, if we do it right, to provide more return to the ESOP than if we didn’t do it,” says Hogan.

From his perch in Minnesota, Hogan thinks strategic acquisitions may play an even stronger role in Diversified’s aggressive gameplan. “There’s a fair amount of consolidation going on in this industry, given the demographics of owners out there. I’m sure it’s going to continue for the next x-number of years. Once we see this is successful and we learn from it, I wouldn’t be surprised if we’re looking for additional acquisitions in the future.”

The essential role of people in your CI journey