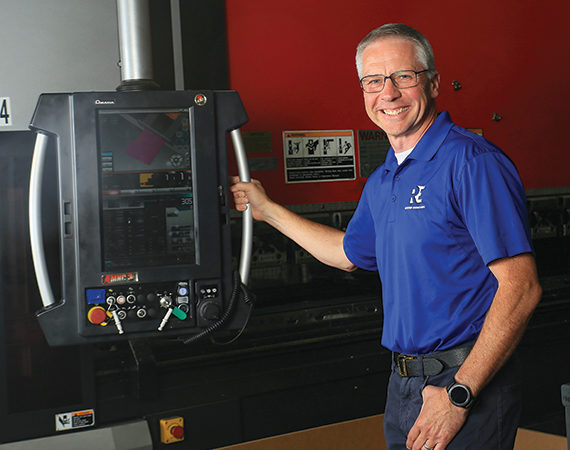 Rotation Engineering discovers a way to ‘zipper together’ EOS and ISO.

Craig Komschlies has heard other manufacturers equate the two prevailing business management systems to the compatibility of oil and water.

ISO 9001:2015 emphasizes building a quality management system that requires the involvement of top management. It stresses risk management and the importance of a culture of continuous improvement. EOS—the Entrepreneurial Operating System—helps small and medium-sized companies find efficiencies and the focus to navigate the increasingly sophisticated marketplace.

Plus, he feels he needs both.

Rotation Engineering was a 37-year-old company when Komschlies purchased it in 2010. The company matured from a one-person, tool-and-die shop to a sophisticated and diverse metal stamping operation whose 45 employees work from a 38,000-foot custom-designed facility in Brooklyn Park. Komschlies, originally a chemistry graduate from St. Olaf College, most recently spent 16 years as controller at Chaska Machine & Tool.

Komschlies prefers not to talk publicly about Rotation’s revenue numbers, other than to say the company has “grown substantially” since he acquired it.

So, as he plotted the company’s future growth, his radar exposed three potential impediments to growth. First, the revenue-generating economy was not going to last forever. “There’s always the potential of a looming recession,” he says. “It has to happen sometime.”

Second, like virtually every manufacturer, Komschlies was acutely aware that the growing shortage of potential employees would inhibit his capacity to grow. “It’s just hard to get employees in,” he says. “We have to pay more and more on a starting level, even just to get operators in—which bumps up other costs.”

And the third potential impediment: Rotation, like most manufacturers, faced constant and simultaneous pressure from customers to reduce costs.

Komschlies looked at ISO 9001:2015 as a management system. And while Rotation was ISO-certified, the new version of the system was far more oriented to company management than previous versions. But he felt it didn’t go far enough. “ISO wasn’t enough to keep our structure together to function well,” he says. “I don’t wave ISO like a banner or marketing ploy. I believe in it. And employees here at Rotation do, too. But it wasn’t enough. EOS made the difference.”

Komschlies read the book Traction: How to Get a Grip on Your Business, written by Gino Wickman, the business consultant who developed the EOS management system. Komschlies says the book “spoke to me very clearly about some of the issues that can befall a company.” Rotation started its EOS journey in December 2017.

Rotation’s leadership team acclimated to the efficiencies and simplicity of the EOS structure, but Komschlies realized it wasn’t fully integrated with ISO. “We were focusing on the right corporate goals for EOS, but we were running parallel with ISO. I just never accepted the fact that these can’t fit together. They’re two different processes, but the goals should be the same.”

To make that happen, last September he called on Enterprise Minnesota, which dispatched a team led by Keith Gadacz, a business growth consultant with deep experience in ISO business management systems.

Gadacz laid out an action plan identifying 15 issues that needed attention as Rotation prepared for its next ISO audit.

The process sorted out some initial sticky issues as the Rotation management team worked to synthesize an array of key performance indicators. The team invested eight months before the two management systems actually “zippered” together, according to Gadacz. “You could almost see the hockey stick show up on the chart of their metrics and indicators. Things were starting to click, from Craig and his top leadership to the second level support right behind him.”

For Gadacz, the process helped demystify the often-segregated silos of EOS and ISO. “They are essentially the same,” he says. “They are about improving the business with a set of tools and the cadence of leadership accountability that makes it successful.”

For Rotation, the systems now align.

“We now have one direction,” Komschlies says. “We don’t have two separate systems. They’re all incorporated into one system, and it’s seamless.”

The process also incorporates lean tools, according to Komschlies, which, he adds, contributes another level of complexity. “Some of our guys were using lean tools, which I also love. But you have to put it in perspective: one’s an operating system, and one is a toolbox that you can use when you see how these fit together. So, pulling those three worlds together was rather effective.” Like a hat-trick in hockey, incorporating these three goal-making systems into one makes for one winning structure.