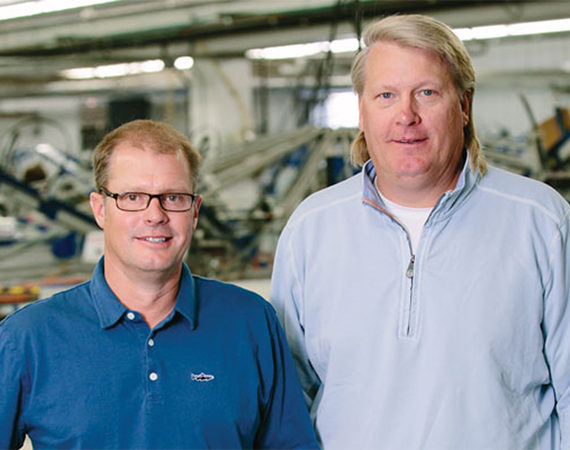 Lakeshirts has used a disciplined sense of their marketplace, well-timed acquisitions, and a sense of irreverence to create an apparel company that does $60 million in revenue.

Forget Thomas Wolfe. Detroit Lakes natives Mark Fritz and Mike Hutchinson have proved you can go home again – and do quite well for yourself (and your community) along the way.

Thirty years ago, the two 19-year old boyhood pals founded Lakeshirts, a company that would eventually dominate the U.S. market for custom-decorated apparel. If you ever bought a souvenir shirt commemorating a vacation visit, chances are good that it was designed and manufactured in their 275,000-foot production facility just off of Highway 10 in Detroit Lakes.

In 1984, the fledgling entrepreneurs started printing shirts in Mark’s parents’ basement to sell on Detroit Lakes’ mile-long beach. “At that time,” according to Lakeshirt’s in-house history, “the company consisted of two teenagers, a couple dogs, a homemade plywood printer, two secondhand kitchen ovens, and cookie sheets for curing the ink. The product line included a handful of screen-print designs that were sold at the small beach store and custom artwork for local resorts, restaurants and businesses. We didn’t have many rules back then other than no beer until after 8 pm, no Frank Zappa while customers were around and lastly, no leaving until the orders were out the door.”

The first-year company brought in about $13,000. Since then, the two entrepreneurs have used a disciplined sense of their own marketplace, well-timed acquisitions, and a sense of irreverence to create a company whose 435 employees last year produced more than two million t-shirts and sweatshirts, bringing in some $60 million in sales.

And their achievements haven’t sacrificed their original sense of owning a fun place to work: “house dogs” still roam the offices, and the quickest route from the second floor down to the company’s new cafeteria is to slide down a twisting water park-style plastic slide.

The two partners still live about 10 doors apart in the same Shore Drive neighborhood they grew up in. “People say we’ve come a long way,” Fritz says. “Hutch moved down one door, right next door to his parents eventually. I’m about five doors down. We’re still in the same neighborhood, within a block.”

Fritz and Hutchinson launched Lakeshirts while still in college, both initially at St. John’s. Fritz had his eyes on dentistry, like his father. Hutchinson, a self-described “English and history man” had contemplated a career in law, “for about five minutes.”

But at a more basic level, both were born entrepreneurs. “I’d always had these businesses, from selling worms to bait shops to painting houses,” Fritz says. Their first collaboration began while the two were barely in high school, with a lawn maintenance business. Fritz launched the company on his own, but had no trouble luring Hutchinson away from his summer job performing menial tasks at a local mink farm. “We had a million lawns,” Fritz remembers. “We made more money than just about all our friends, and set our own hours.”

Fritz transferred to Montana State, where he began to re-evaluate dentistry. “I like this business stuff.” He observed how Ocean Pacific seemed to be cornering the market on custom apparel.

“We know how to do t-shirts,” he concluded, with a bit of bravado. “This is a no-brainer, this should be a billion dollar business in a week.”

“That’s the beauty of being young,” he adds, “you think anything’s possible.”

Working an initial customer base of local resorts, the two set up base in Fritz’s boyhood basement where his grandfather, an electrician, wired a couple ovens up against a wall and we cooked everything on cookie sheets.

In the summer of 1984, they converted an old resort cabin into a retail space and did $13,000 in business. They returned to college, and started selling customized apparel to dorms and other college-related customers.

“They were horrible little orders,” Fritz recalls. “They’re 30 pieces, 20 pieces, and decisions being made by committees, but it worked for us.”

Relying on the resort business the company grew steadily, reaching $3 million in revenue by the mid-‘90s.

A turning point in the business may have occurred in 1997 – depending on who you talk to – when Hutchinson attended a trade show in Atlanta, looking for machines to help Lakeshirts capitalize on the flourishing demand for embroidered shirts.

In Fritz’s telling, Hutchinson flew to a trade show in Atlanta with enough bank financing to acquire three new embroidery machines at $100,000 each.

Hutchinson called in from the show: “They gave us a great deal. I just bought seven,” he told his partner.

“Seven!” Fritz remembers saying. “How are we going to pay for it?”

“I don’t know. I don’t think we need to pay right away,” Hutchinson said.

For his part, Hutchinson recalls seeing only upside. “I’m great at buying machinery,” he says. The banking issue, he remembers, “never really got in my way much. They always lived with it.”

What he didn’t tell Fritz right away, was that he had also negotiated to purchase two more by the end of the year. “I knew we would need them, and we did.” Hutchinson said.

His instincts were spot on. Their embroidery capabilities accounted for 85 percent of their business.

Featured in the Winter 2015 issue of Enterprise Minnesota® magazine.