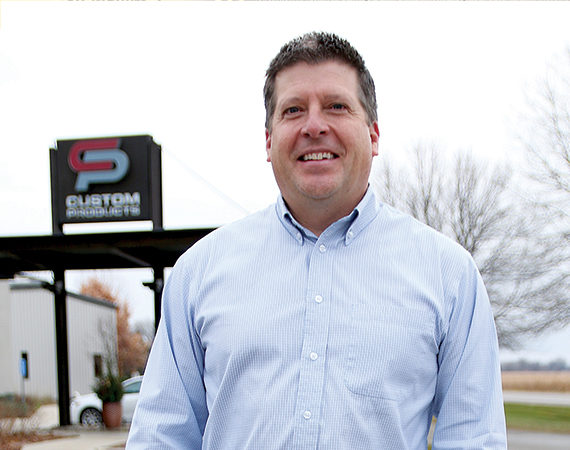 Litchfield’s Custom Products builds its reputation one cab at a time – literally.

It’s a gloomy October day, but Scott Maki is all smiles. He dons protective eyewear and leads a visitor onto the manufacturing floor of Custom Products. Machines buzz as he strides past busy workers, stacks of variably sized sheet metal, and partially finished cab enclosures.

A dark-haired woman rumbles by on a forklift. “Excuse me!” she says apologetically.

Like a guide on a tour of historic homes, Maki never misses a beat as he gives details about everything happening at his company. He describes his enthusiasm for his plant’s productivity like some men talk about football. He points out the efficiencies management has brought to the plant, how they’ve reconfigured the painting area to make things run more smoothly, how they’ve rearranged the order of operations here, relocated some tools there. All the while, workers can be seen running “tube-bending” machines or welding pieces of metal together. Others are assembling cabs, and still others are preparing to paint them.

“My very first job was at Custom Products,” Maki says of the Litchfield-based maker of cab enclosures for industrial vehicles. “Coming back six years ago was sort of a homecoming.”

After bouncing around for several years at other companies, Maki returned to Minnesota to be closer to his family. But there was also another reason.

“I love cabs. I’m super passionate about it,” says Maki, who has been in the industry since 1992. “I may not be able to do anything else, but I know something about cabs.”

But this story isn’t about Scott Maki.

It’s a story about a company in the slightly isolated city of Litchfield, surrounded by well-known competitors such as Bobcat, that has defied the odds and is thriving. With a work environment built on quality products and fair wages, Custom Products has turned into the kind of company that produces a guy who would say, “I love cabs.” Maki’s story is emblematic of the culture at the company.

And even though Custom Products may not be the world’s largest manufacturer of cab enclosures, in Minnesota, it’s one of the most important.

For the uninitiated, the cab of an industrial vehicle is the sexy part. Generally, companies that specialize in cab enclosures focus on the “extras”—heated seats, GPS, surround sound. Custom Products, though, focuses on safety. Their cabs come ROPS certified—rollover protection system. Custom Products also specializes in falling object protection systems. Their products not only look good but keep people safe while doing so.

Custom Products was founded in 1959 out of the necessity local building contractors had for metal fabricators. The company’s first offering was something called “rafter sockets.” It didn’t take long, though, for founder Arvid Reinke to produce the item that would become the company’s bread and butter: the cab enclosure.

Reinke produced the company’s first enclosure at the request of a local farmer who wanted one for his tractor.

The business grew quickly, according to Custom Products’ own history documentation, and it moved to a larger, and current, location in 1965. After becoming ROPS certified in 1972, Custom Products added “tube bending competencies” in 1981, computer-aided design and laser cutting in 1985, and manufacturing resource planning software in 1988.

Scott Maki describes his enthusiasm for his plant’s productivity like some men talk about football.

In 1995, Custom Products started a program that Maki says the company is most proud of: the 5-star Engineering Apprentice Program. The program invests in the community by helping students thrive in the engineering disciplines. Every year, the company chooses one high school student to take on as an apprentice.

When asked how the company has gone about becoming a leaner operating plant, Maki points to the company’s ability to identify waste. “That was the core piece of it for us.”

Within the last five or so years, Maki continues, they’ve really tried to incorporate better, smarter ways of doing the work. He says they’ve had a few “champions” inside the company who had experience making things leaner, and those individuals were allowed to start working on some changes.

“So, with my blessing, they started turning on what people already knew,” Maki says.

In some cases, it came down to using logic and common sense. And remembering the 5S system of visual management—Sort, Set in Order, Shine, Standardize, Sustain.

It’s using fully engaged teams of people and looking at what they really need to do their jobs.

“This lean manufacturing methodology uses fully engaged teams of people and looks at what they really need to do their job,” he says. “If you don’t need it, if it’s cluttering up your area, it goes. For example, the only tools that should be in a particular work area are the ones needed to do the job.”

“Eight years ago, it was a lot of the batch-build mentality, old school thinking,” he says. “But over the last eight years—and really over the last two years—we’ve transitioned to the one flow.”

“It allows for a better flow of product,” Marotte says. “It also helps out with quality so that issues and problems can be addressed quickly.”

Transitioning to this style of production, Marotte continues—as well as rethinking the company’s materials presentation—also allows Custom Products to more easily set up the tools needed for a particular job.

Finally, Marotte says, producing one cab at a time reduces the amount of floor space needed to store the inventory. When 10 to 20 cabs are manufactured, they need a place to park.

“That took up a lot of floor space,” he says. “It also required forklift use and man hours. Working around all that inventory was problematic.”

Maki says that, so far, most employees seem to appreciate efficiency becoming a priority.

It’s no secret that attracting and retaining good workers is a challenge. Custom Products’s location—not on a major highway or in a metropolitan area and close to competing towns of similar size—isn’t doing them any favors either.

So, Maki says, they do what they can to convince workers to give Custom Products a chance.

“We had bagels today!” Maki jokes. “Actually, we’ve really tried to improve how we recognize our employees. We try to make sure they know we appreciate them.”

By incorporating different types of recognition, along with bonuses, Custom Products is working to build team unity and applaud top performers. The company also offers opportunities for advancement to help workers see that their job can easily turn into a career. These bold initiatives are needed, Maki says, because workers have options.

“We see people leaving our job site on a Friday and then working somewhere else on a Monday,” he says. “And sometimes for more money.”

The company has increased employee wages and even tried an attendance incentive program that gave employees $100 for showing up to work every day (they’ve modified that program slightly since its inception).

Even in the offices where engineers work it’s hard to keep ranks full, Marotte says.

“Finding engineers in the middle of Minnesota is difficult. As a small town, we are just close enough to the cities so that we end up competing with the suburbs.”

Among the current staff of five engineers, Marotte continues, the average time with the company is about eight years, which says a lot about how Custom Products treats its employees.

“I like the longevity and the knowledge gained by working with so many different (original equipment manufacturers),” he says. “It’s a good place to work for many reasons—it’s a small town community, everybody’s very friendly, and they care about what’s going on in people’s lives.”

Marotte says he believes Custom Products’ wages and benefit packages are competitive, which helps them get noticed when they’re hiring, but filling job vacancies—especially in the engineering department—is still a challenge, and it can take up to six months to fill a job.

“In Willmar, they have daycare centers and housing. But 20 miles away in Litchfield, there are daycare and housing challenges,” he says. “The population thins out pretty quickly when you get past Litchfield. They do recruit full time, though, and they’re pretty aggressive.”

Kill says he believes Custom Products has remained successful because the company plays to its strengths and has developed a great product.

“I think it’s a niche product, and they have a good strategy that has proven itself through thick and thin,” he says. “They provide products for the mining industry and agriculture, and they’ve really stayed focused on that, plus on driving innovation and adding value. It’s worked— they’ve been around for 65 years.”

Kill says the company’s president and CEO, Randy Reinke, has done a great job of continuing the legacy started by company founder Arvid Reinke. In 2016, when several state lawmakers visited Custom Products, Randy Reinke told the Litchfield Independent Review, “What we do saves lives. At the end of the day, our goal is to, No. 1 protect the operator, you know, make sure the design is safe from the standpoint of these (safety) standards. But secondly, our relationship with the OEM (original equipment manufacturer), the people making the equipment, is to put them in a better product liability situation.”

Says Kill, “Randy Reinke is the epitome of a manufacturing executive who really believes in the value of the private/public partnership.” Through the company’s apprentice program, Kill continues, there is enthusiasm and youth brought to the plant, but also a willingness to invest in the community and the community’s human capital.