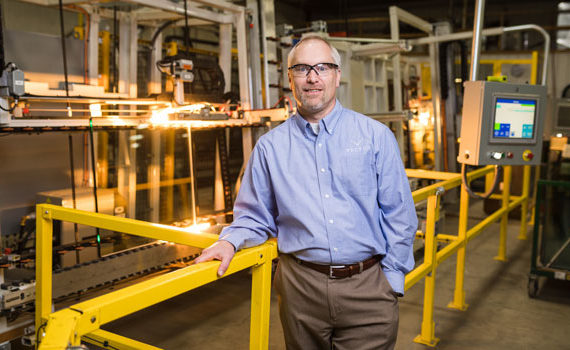 With no fear of job cuts from automation, Vector Windows’ employees embrace their new robot

Long before the current worker shortage began to undermine all manufacturers’ plans to grow profitably, Vector Windows had signaled how people would play a role in its strategic growth alongside its new productivity-enhancing robot.

The Fergus Falls-based manufacturer of vinyl windows and doors foreshadowed its early appreciation for the power of people shortly after Jeff Ackerson arrived as the company’s new president and CEO in 2007. He earned a B.S. degree in mechanical engineering from North Dakota State University and an MBA from Drake University. In his previous role at Pella Windows and Doors, Ackerson worked in design engineering, manufacturing engineering, and oversaw the company’s efforts at lean manufacturing. His best experience came when he transferred to Gettysburg, Pennsylvania to start up Pella’s first vinyl window and door manufacturing facility.

In a display of shrewd self-confidence, Vector Windows used the 2008-2009 recession to double down on its workforce. As cautious competitors pulled back their operations to assess the pace of the economy’s recovery, Vector aggressively expanded its sales force, recruiting high-potential employees who had been discarded by skittish competitors.

Vector was founded in 1995 as Vinylite Windows, a company that would manufacture and sell vinyl windows and patio doors throughout the Upper Midwest. Today, 60 percent of its products are custom-sized windows in custom varieties, different colors, and glass packages for new construction. “We don’t really have a retail channel or a wholesale type thing, and we don’t sell to the big boxes,” Ackerson says. “So, we don’t have anything sitting on a shelf somewhere either. It’s basically ordered, and then two weeks later shipped to the customer.”

While competitors extended lead times to try to save costs, Ackerson says, Vector continued to deliver its high-quality product on time and solidified sales relationships. “We went in whole-hog,” he says. “We invested in the business, invested in our people, and we literally grew by market share. We stole a lot more business from our competitors.” As the economy recovered, Vector enjoyed an even larger slice of its market. Vector’s revenue grew all through the recession, Ackerson says. In fact, it has experienced double-digit sales growth every year since he joined the company.

Now, enter the robot. Last October, Ackerson attended GlassBuild America, a window and door manufacturing trade show in Las Vegas, where he was first introduced to the robot.

Most of his operations depend on manual processes, but one area had potential: creating high-efficiency, double-paned windows. Quick calculations revealed that a robot would enable him to reduce a process that required 12 operators—six each on two shifts—down to four in just one shift. Vector is able to use this robotic technology to combine two panes of glass with a space and replace the air between them.

Justifying the decision, Ackerson says, was “close to a no-brainer,” even though the $1.5 million price tag made the robot a very expensive piece of equipment.

Freeing up eight full-time positions for experienced, reliable employees was a real gift, from Ackerson’s point of view. “We continue to struggle to find good people,” he admits. “It’s not just freeing up those eight bodies, it’s being able to put them to work somewhere else as we continue to grow so we don’t have to hire eight more individuals on top of it.”

First, employees needed to know that it wasn’t an attempt to steal their jobs, which became fairly obvious. Employees knew, for example, that Vector was struggling to maintain its employee count, just as every manufacturer in the region. On top of this, Ackerson says that every employee is told repeatedly no one will ever lose his or her job from an improvement activity. “If we can find a way to go from six people to five, we’re not going to lay someone off. We tried to make the change a positive for everybody, even the ones who we’re moving out of their comfort zone and into a new area of the business.”

But Ackerson wasn’t taking any chances. He circulated photos and brochures to hype the “cool factor” of deploying robot technology. Company management convened teams to discuss the project every time they received new information. “We went to those glass line employees first and made sure they were 100 percent up to speed on what was happening, where it was coming from, what it was going to look like, just to keep them the most in the loop.

“Our promise to them was, by being able to reduce those costs, we’re going to grow the sales enough to make sure that we can reallocate anybody freed up off of this equipment into other areas of the business.

“This may have been particularly compelling, since employees have a literal investment in the success of the business. Profit-sharing at Vector means that every employee gets a dime of the company’s profit. We made sure that employees knew this was going to drop to the bottom line. So, it’s a big deal to them that we’re driving more profit.”

In the end, a positive buzz circulated through the manufacturing floor when the trailer rolled into the company with the large piece of robotic equipment. From the beginning, employees requested opportunities to take a look at how it operates. The company even shut down operations to give mini-tours to all who wanted to watch it work.