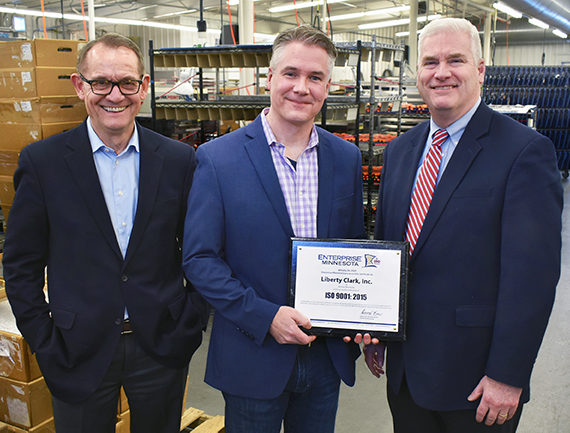 While many manufacturers think of ISO 9001 certification as a means of getting new customers and differentiating themselves (which is true), the value of the certification process can impact every corner of a company.

Liberty Clark, a provider of highly decorative pad and screen print sub-process services for manufacturers, OEMs and OEM suppliers, chose to get ISO 9001 certified in part because its customers were certified. By achieving this international standard, the company could demonstrate process efficiency and continuous improvement along with the ability to consistently meet customer and regulatory requirements. “Becoming ISO 9001 certified differentiates us from competitors,” says Brian Clark, president of Liberty Clark. “It also provides confidence to our customers that we essentially follow the same procedures and documentation.”

The ISO 9001 certification process took about a year. An Enterprise Minnesota consultant visited Liberty Clark biweekly to discuss requirements and help move the company through the process step by step. “It was very involved and we discovered a lot about ourselves,” Clark says.

Even if the ISO 9001 never gained them a new customer (which it has), the comprehensive improvements that came about as a result of the process have been invaluable. For example, like many organizations with longtime employees, Liberty Clark’s institutional knowledge was locked away in the minds of just a few people.

“The benefit of doing the ISO certification was that we had to document every procedure, so it put employee knowledge down on paper,” Clark says. “Now these skill sets aren’t limited to one person and it’s helped with cross training. We quickly discovered that this was going to greatly improve our processes.”

ISO 9001 also gave Liberty Clark a roadmap for documenting improvement ideas, which has shifted approaches to problem-solving. For instance, documentation attached to each work order measures time and productivity, as well as problems encountered. In the past, the documentation was merely a list of problems and reasons why production wasn’t met. ISO 9001 taught Liberty Clark how to turn that documentation into a learning tool.

“When employees encounter issues during the production run, they have to document what they did to solve the problem,” Clark says.

“Then we can take that information and update work instructions for future runs. It’s a way to think differently because it focuses on problem-solving.”

It’s the journey, not the destination

While earning ISO 9001 is important for attracting new customers, the journey of it also prepared Liberty Clark for new opportunities. When a new customer of an OEM supplier wanted to know more about Liberty Clark’s operations, he or she sent an auditor to assess the company and its capabilities.

“That internal audit was very similar to the ISO certification audit—maybe even more in-depth!” Clark says. “If we hadn’t gone through the ISO process, we wouldn’t have had any idea what this auditor was talking about or the documentation he or she requested. But because we had the certification, we were prepared for it, and that ultimately led to us getting the work. I’m very confident that if we didn’t have the certification, which included the internal audit, that wouldn’t have happened.”

Garbage In, Garbage Out

The importance of optimization before automation.

By watching market trends, Lowell, Inc. has evolved from providing…