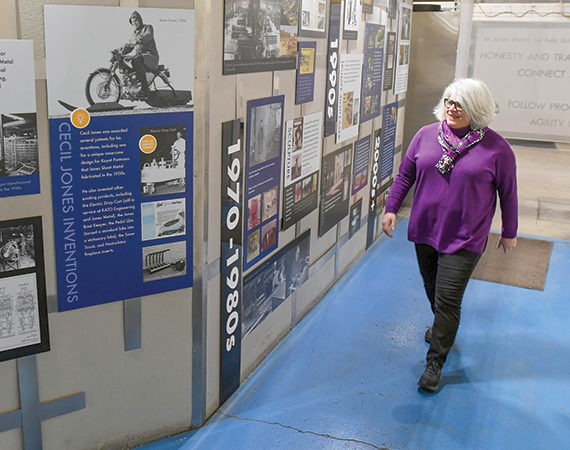 To fully understand how profoundly the paperless transformation has impacted Jones Metal, maybe it’s best to envision how things functioned in the plant before that transformation took place.

Engineers custom design a client’s work order to exact specifications. Instructions for that design churn out of a printer and get distributed to dozens of machine operators around the shop. Each operator’s workstation, then, has a spot for a stack of papers that represents the day’s work.

“Two people on the inside sales team would basically launch into firefighting mode,” Jones Metal COO Toby Begnaud says of the old system.

They’d spend up to an hour chasing around the plant gathering up all the copies of the work orders from brake press operators, welders, laser operators, etc.—sometimes up to 50 different work orders. They’d either pull them from the stacks entirely or, if the change was simple enough, make hand-written notations on the physical documents.

“You can imagine the amount of time that it would take to dig up those orders, stop the process on the floor, bring it back in, make all the changes—again, in paper form—print it, and now it becomes history again,” Jones Metal President and CEO Sarah Richards says. “It’s out of date the minute it’s printed. We were essentially handcuffed with old information.”

Now let’s take a look at how that problem would be handled today, in the post enterprise resource planning software (paperless) era.
The customer orders a change. An employee enters the change into the computer-based work order management system. In milliseconds it is visible to operators on the shop floor, who instead of having stacks of paper now have computer screens, where they see work orders prioritized, progress tracked and changes updated … in real time.

No scrambling around the plant with a Bic pen. No wasting an employee’s valuable time. No worrying about unnecessary delays. A problem that once would have eaten hours was solved in a matter of seconds, and hardly anyone needed to know or be bothered by it.

“We’re able to make changes on the fly, make changes on what we’d planned to produce—even that day,” Richards says. Someone can come in at 4 a.m. before the first shift starts and manually change the schedule in the system, and nobody’s the wiser on the floor. “It doesn’t create any chaos,” she says. “People often don’t even realize the changes are being made, so it doesn’t throw them into a chaotic mode.”

“We were essentially handcuffed with old information.”

Jones Metal’s transition to paperless work orders began several years ago when Richards started poking around the shop floor, asking employees along the production line one simple question: “How do you know what to do next?”

She discovered that workers would complete a task and then hunt around for their supervisors to get further instructions.

“There was a lot of wasted time,” she says. “In a system like this, everybody seems to know what to do next.”

Richards says the increased efficiencies and cost savings on work orders easily justify the expense of transitioning Jones Metal to a paperless operation.

Employees have mostly taken the transition in stride, she says, even though some old hands were initially reluctant to abandon the comfort of old habits.

“They used to like to get the big stacks (of paperwork orders), so they could pick their way through and arrange their day the way they’d like,” she says. This kind of independence would confound overall processes.

“We’d have stoppages because somebody chose to do something first, something that really should have been done last,” Richards says. “Now, they just move down the list.”

COO Begnaud agrees: “It’s really training operators on the importance of the schedule, as your coworkers are all planning their day around that same execution.”

Begnaud strolls onto the shop floor, past a wall of sheet metal neatly emblazoned with barcoding (which is part of the paperless system that makes everything highly efficient).

Stopping at an operator’s station, he demonstrates the paperless work order system.

After gesturing to his right to show where the stacks of paper would have been, he mouse-clicks through a series of windows before getting to the screen that illustrates just how simple, cost-effective and efficient this system can be.

“This shows the work orders that they’re doing now,” he says.

He points to fields that indicate parts, origin, work-order status and other things. When changes are needed, he notes, the problem is quickly resolved.

“It would just pop off the screen,” he says.

These computer terminals do more than merely relay work orders. Whereas the old paperwork orders limited the images available to operators to two-dimensional and black and white, this system can show images in full color.

Begnaud pulls up a 3D image of a part Jones Metal is fabricating. He manipulates the image on-screen, twists it left and right, zooms in and out. He pulls up another, this time a color version of the black-and-white image the old paperwork orders offered. Again, he zooms in, magnifying the small print of specs and measurements so they can be easily read. With this tool, operators get a full, more complete picture of what the parts should look like.

All in on training

Jones Metal’s paperless transition owes at least part of its success to the time it took to train everyone in the building on how to use it. Richards says they included everyone in the process because they valued the input of the people actually doing the work.

“We like to include them in the teasing phase of ‘this change might be coming,’” she says. “It’s about honesty and transparency. If we’re going to make a change to your world, we want to let you know. And then we usually have a time for them to train and also to voice their opinion or talk about it. Often, they’re part of an exploratory group that looks at new technology or new opportunities for us to smooth our flow. That’s what we’re always trying to do.”

Richards says the cost to going paperless was substantial, but they’ve more than made up for it with greater efficiency. She says they’re able to get more done with 95 employees than they were a few years ago when they had 120.

They’ve had attrition and retirements, she says, and in some cases, they’ve eliminated those positions because of the gains they’ve made in efficiency.

From a strictly paper perspective—actual physical paper—the transition has brought substantial savings. Jones Metal had been spending $30,000 to $50,000 annually just on paper for work orders. But the savings overall has been far greater.

“If we spent a quarter-million dollars making the change to the new system, we probably got that back in two years or less in savings,” Richards says.

Added Begnaud, “We pretty much have two forklift operators who can manage the entire floor on first shift. We used to use four on day shift and maybe one or two on nights. That’s a $50,000 savings for each one of those people.”

By watching market trends, Lowell, Inc. has evolved from providing…