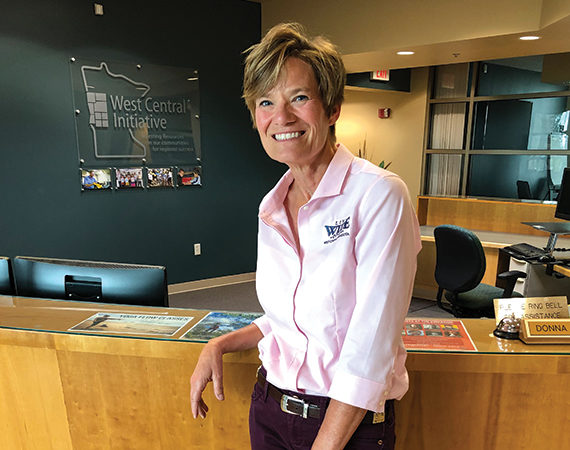 How the West Central Initiative and Enterprise Minnesota partner to create jobs.

One day in the early 1990s, Wally Stommes hooked up with Bill Martinson, a business development consultant at Enterprise Minnesota (then called Minnesota Technology, Inc.). Stommes and partner Gerry Nelson had just co-founded StoneL, a Fergus Falls-based manufacturer of valve-monitoring products that send electronic messages to a processing plant’s control room regarding the status of its valves. Both men had been working at Proximity Controls when they came up with an idea for a new valve monitoring device, but it was an idea that Proximity Controls swiftly rejected. So, Stommes and Nelson left Proximity and launched StoneL (a combination of their last names). They turned their idea into the company’s first product line.

But Stommes and Nelson’s vision was broader than simply making a great product; they wanted to secure a great workforce that was well-trained and loyal, and an operation that was as efficient as possible. After discussions with Martinson about available trainings and programs, StoneL worked with Enterprise Minnesota to identify programs that would have the biggest initial impact, including lean and continuous improvement trainings. As StoneL’s devices gained traction in the market and the company became a global player, Stommes and Nelson took advantage of Enterprise Minnesota offerings such as Self-Directed Work Team training, Value Stream Mapping training and Training Within Industry (TWI). In 2000, StoneL was sold to Metso Corporation, a Finland-based global manufacturer. Since then, it has more than quadrupled its revenues, added more manufacturing capabilities and constructed a new facility. In recent years, StoneL prioritized Practical Problem Solving and ISO 9001 upgrade training, which Enterprise Minnesota administers.

The StoneL experience showcases that building a talented and loyal workforce takes time and resources, something a small manufacturer doesn’t always have. “One of the most important things an employee can get from an employer is that he or she is appreciated. It helps the entire region; the employee stays invested because he or she sees a future here,” Martinson says.

That’s when public-private community partnerships can be important—when organizations with aligned missions can serve the economic development needs of an area better than they ever could on their own. In fact, all of the trainings for StoneL and other west central Minnesota companies could not have happened without the funding support of the West Central Initiative (WCI).

“It was visionary,” Martinson says. “They knew the region needed a stronger workforce. The pay levels here were on the low end compared with the rest of Minnesota. They saw a future workforce shortage because of this. It was really visionary on WCI’s part to put together a program and dedicate grant money for workforce development.”

The hurdle was getting Workforce 2020 out into the community. In manufacturing terms, WCI needed a distribution channel.

Because of its network of deep relationships with manufacturers and its membership in the national Manufacturing Extension Partnership that connects companies to the best trainers in the U.S., Enterprise Minnesota was a natural partner for WCI. “We rely on Enterprise Minnesota to talk with companies and find out what support they need to do things like increase productivity or to compete in the market,” says Wendy Merrick, director of programs at WCI.

Nearly 30 years later, this mutually beneficial partnership continues. At its core, the work is about listening to a manufacturer’s needs, not pushing an agenda. “Bill [Martinson] is not out to sell our services or Enterprise Minnesota services; he goes in to listen,” Merrick explains. “He has resources worldwide, so these companies are getting world-class services from the best-of-the-best trainers. This partnership is about, ‘How can we support small manufacturers in a way that’s good for the economy of west central Minnesota?’”

The partnership’s work with companies like StoneL can affect an entire region. Merrick explains that when a company grows and is successful, it has the capacity to give back to the entire community. For example, Gerry Nelson of StoneL served on the Labor Force Development Council (LFDC)—a voluntary association of leaders in business, K-12 education, higher ed, economic development, government and other industries—that shares resources and plans strategic initiatives to attract and retain a strong labor force that is responsive to the needs of area employers.

In a video for WCI, Nelson explains why the LFDC is important for west central businesses and the entire region. “We have had outstanding employees who have come from this area or who have moved back to this area to work for us. I just want to say a great big thank you not only to West Central Initiative for supporting us as a company—it would’ve been a much tougher time if they hadn’t been there—but to all of the companies that they work with in the area.”

The public-private partnership formed between WCI and Enterprise Minnesota didn’t have a template. In fact, there was no other program quite like it. “People from other parts of the country would come to look at us,” Martinson says. “Their missing link was usually not having a partner like Enterprise Minnesota. They didn’t have that distribution channel where someone was seeing the need and setting up projects.”

The partnership has built a stronger regional workforce. Studies commissioned by WCI have found that turnover among companies that accessed Workforce 2020 is lower and statistically significant.

In addition, WCI reports that the region saw a 60 percent gain in full-time jobs from 1990 through 2014—the highest percentage increase of any Minnesota region. Wage increases were also in line or, in some cases, higher than other regions of the state. While WCI doesn’t claim to have single-handedly shaped these results, it says at least part of the success can be attributed to the thousands of employees who have been impacted by Workforce 2020 and the intensive development and trainings by area employers.

“When you have higher wages in an area, you improve lifestyles and get more economic activities because there’s more money to be spent and a higher standard of living,” Martinson says.