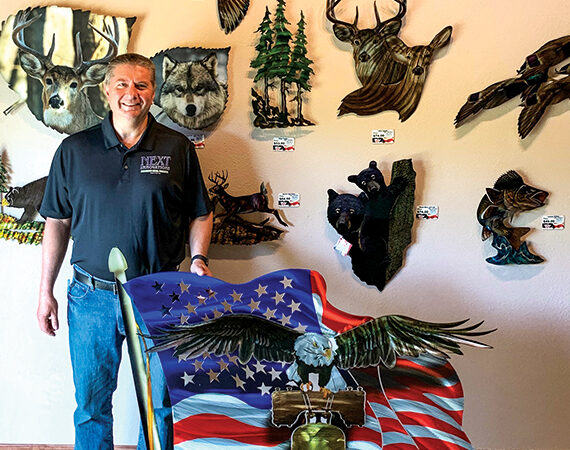 Next Innovations hopes to exploit increasing demand for American-made products.

Several years ago, Next Innovations—a Walker-based company known for custom wall art and eye-catching wind spinners—came up with what it calls its “blanks” program.

Simply put, the company created hundreds of pre-cut, mostly rectangular steel shapes, or what it refers to as “blanks,” that can quickly be deployed to fill custom signage orders. Given the necessary graphics and specifications, Next Innovations can turn orders around almost overnight.

The program was a nice complement to the company’s already robust line of patriotic wall art products and popular “EyCatchers,” which were once featured on a Twin Cities television station.

Then the coronavirus pandemic hit. And suddenly the company’s blanks program became a lot more relevant.

A quick glance at one of its product websites, metalartmaker.com, shows a selection of signs that Next Innovations developed to help business customers react to the pandemic. Signs that urge social distancing and signal locations for hand-washing stations were available on the company’s website very early on during the health care crisis.

“SuperValu is one of our biggest customers. We do a lot of ‘Curbside Pickup’ signs for them,” Arnold Volker, president and owner of Next Innovations, says. “If we have the graphic, we can almost literally make the sign the same day. For us it is pretty easy to do.”

While brick-and-mortar sales are, obviously, down with the state being shut down, e-commerce is doing exceedingly well. Volker says the company has seen a 400 percent increase in e-commerce. And that boost in sales wasn’t just because of the pandemic.

During the last 18 months—whether it’s due to tariff wars or the pandemic—Volker says he’s sensing a change in the American consumer. They want more American-made products. And he says Next Innovations, by strategically cutting down its inventory and embracing e-commerce, is positioned nicely to take advantage of that demand.

One move it made emerging from the recession was to reimagine the way it uses space. At one time, about 20,000 square feet of the company’s 50,000-square-foot facility was dedicated to inventory storage. He says that the company stored about $1 million in inventory on site.

“And that’s risky. There are holding costs. And what if it doesn’t sell?” he says. “Since the downturn, we’ve cut back significantly on inventory. We went from $1 million in finished goods to less than $100,000. And we’re turning things quicker by having this blanks program.”

That blanks program is one of the key developments in the company’s history, and it’s so simple.
In the realm of signage, sizes and shapes are—in theory—unlimited. But in practice, a lot of the signs you see in the world around you are found on a relatively small number of sizes and shapes. So, Next Innovations decided to create a stockpile of so-called “blanks.”

“When we cut a shape, we might have 100 different images that can go on that particular shape,” Volker says.

But Next Innovations didn’t make a name for itself with quick-turnaround signage.

The company established itself as one of the premier makers of custom wall art and home decor, and it once held the record for sales on the German version of the QVC home shopping network. The company’s signature product, the EyCatcher wind spinner—a home decor item that comes alive in brilliant colors when touched by the sun’s rays and a light breeze—remains a popular item. You can even find them at Disney World.

Next Innovations has also established a major presence in e-commerce; its home decor products can be found online at Amazon, Walmart and the company’s own retail site. And its biggest e-commerce partner, Wayfair, has more than 1,400 Next Innovations products available.

On top of that, Next Innovations has become a leader in sign making and has demonstrated its value to statewide merchants by quickly producing high-quality pandemic-related signage. You may have even seen their “Sanitation Station” or “Curbside Pickup” signs, which they were able to produce, literally, within hours of getting requests.

Volker says his company is perfectly positioned to take advantage of what he predicts will be a very profitable future. With consumers increasingly demanding American-made products, and with an impending upgrade to the company’s ISO status, Volker says things are looking up.

Both Volker and Next Innovations certainly have come a long way from a time when the company could easily have disintegrated. Through the kind of perseverance that is common in northern Minnesota, Next Innovations has weathered more than one setback.

Next Innovations was founded by John Zacher. Born and raised in the Twin Cities, Zacher and his wife moved to Hackensack, just south of Walker, in 1993.

In 2012, Next Innovations achieved regional acclaim when KSTP journalist Jason Davis visited the plant to record a segment for his “On the Road Again” series. The segment featured the EyCatcher and focused on the unique finishing process Next Innovations uses to create the item’s shiny and, well, eye-catching appearance. The segment gave the company a slight bump in sales. In fact, each time the segment re-airs, the phones at Next Innovations start ringing again.

Next Innovations uses a patented “7-Step Infusion” process that chemically bonds colors and details onto a steel surface, creating a vibrant, scratch-resistant surface.

But Zacher’s time with Next Innovations would end far too soon. Known for having a zest for both work and life, Zacher loved his family and loved to cook. He also loved to fly.

Zacher took flight lessons for both airplanes and helicopters, and on March 4, 2007 he earned his wings—both as a private pilot for single engine aircraft and helicopters.

On Thanksgiving Day 2011, Zacher and his wife Vickie were flying from Alexandria to Hackensack when his helicopter lost power and crashed into Ten Mile Lake near Hackensack. Vickie swam to shore, but John couldn’t swim. An army of rescue personnel descended upon Ten Mile Lake to try to save him, but couldn’t. They recovered his body the next morning. He was just 56 years old. According to his obituary, Zacher found the skies “calming.”

In the months and years that followed, Zacher’s heirs settled his estate. And eventually Volker acquired Next Innovations.

Zacher’s death, Volker says, was hard on him.

“We had gotten to be close since 2007. I lost a friendship, a mentor, a partner,” Volker says. “We ended up selling off machine shops in the Twin Cities and shutting down the business in Annandale. We had another business in Bagley that we sold off. Next Innovations was by far our largest manufacturing company, and I believed it had the most potential. That’s the one I fought very hard to keep open, and I think John would have wanted us to keep it open.

“When you’re in the downturn of sales and bank pressure and everything else,” he adds, “it wasn’t the easiest feat. But we were able to stay open and keep our employees.”

Volker began working with Zacher in 2007. Volker was a business broker and had approached Zacher about working together. Zacher invited him to join a private equity firm he’d started up called Unlimited Peak, seeking out manufacturing companies that would complement the vision and work of Next Innovations. Between 2007 and 2008, Volker says, they’d purchased four companies, but he says they weren’t relevant to Next Innovations.

By the time Volker came into the picture at Next Innovations, the company was already humming along with EyCatcher sales. In fact, Volker says, at one point Next Innovations held the record for sales on QVC Germany with $1,800 per minute, almost all of which was EyCatchers. (EyCatchers, Volker says, were “a hot new item in Germany.”) The company was making roughly 5,000 EyCatchers daily.

And then the recession came. As did competition.

“Everybody started (making similar but not identical products),” he says, “and basically the German market fell when the U.S. market fell.”

Volker says Next Innovations employed 84 people at its height. By 2013, after lean times and layoffs, it was down to just 11 employees. Today, the number of people in the offices has been whittled down to four, two of whom work part time.

“We hung on to as many people for as long as we could,” he says. “It’s tough to get rid of people, but … you learn to do more with less, I guess. And then some things just don’t get done.”

“It’s better for the contractors,” he says. “The trend with COVID-19 and other things is that more and more people in those types of positions are going to work from home. A designer is a tough position to cash flow eight hours a day. With a contract employee, you’re only paying for what you need.”

While the popular EyCatcher may have put Next Innovations on the map, the big seller now is a different kind of product.

A few years ago, Next Innovations started experimenting with some patriotic decorative wall art. An image of an American flag on a steel cutout of an eagle has been extremely popular.

“We use a dye sublimation process,” Volker says. “So we laser cut, powder coat, and then bake the image into the powder coating. It’s a unique process. And the final product is made for inside or outside. It gives the image a very visually superior look. We have a full patriotic line.”

Volker says the fact that the nation is so polarized right now, politically speaking, has fueled sales of the patriotic images, and he’s more than happy to give the people what they want.

As Next Innovations looks to the future, the company has realized there are a few things it needs to do in order to capitalize on upcoming opportunities. One of those is completing the process to become ISO 9001:2015 certified.

To help them get there, they reached out to Enterprise Minnesota.

Keith Gadacz, an Enterprise Minnesota business growth consultant, says Next Innovations is well positioned to meet its business growth goals. And its history suggests the company will do well.

“When the recession came, when the China competition came, Next Innovations fought its way through to be where it is today by diversifying its product and improving its process,” he says.

Some companies won’t work with a manufacturer that isn’t ISO 9001:2015 registered. Further, Volker says he wanted to upgrade the company’s ISO registration so he could take advantage of a Small Business Administration’s HUBZone Program. HUBZone encourages growth in what it considers “underutilized business zones”—many of which are in rural areas—by awarding at least three percent of federal contract dollars to HUBZone-certified companies. To get that certification, though, a company does not need the upgraded ISO registration. But it helps.

“We are located in a HUBZone,” Volker says. “That gives us an advantage when receiving government work.”

Enterprise Minnesota is helping Next Innovations examine its planning, processing, objectives and resources so that it can reach that important standard.

“We want to poise this company across its matrix of people to be able to grow itself and grow with customers that are diverse enough so that Next Innovations is not going to be locked into one specific marketplace,” Gadacz says. “For Next Innovations, we did a current-state assessment of what it has in place, and then built a ‘what does the future look like’ state map. And we made sure it all looks like the company wants it to in terms of resources, equipment, people and objectives.”